The following morning the sun had gone (and would barely return for the rest of my 200-mile stroll) and a gusting wind blew horizontal, wet snow across the village of Reeth.

But on the plus side, The Manse had washed all of my dirty laundry free of charge (how kind is that?  How brave?) and laid on a breakfast of perfect scrambled eggs, crispy bacon, toast and a fruit salad that I could have eaten, slowly, all day long.

As I sipped my coffee and looked out at the wind-driven sleet, I groaned.  I really didn’t fancy walking today.  Nope, I really didn’t.  I wanted nothing other than to flop down on the rug in front of the open fire and puzzle over jigsaws … with perhaps a little light crayoning to jazz up my day.

But we did have to press on and so – with one last, sad glance at the roaring fire – Pat and I donned several layers and set out, heroically, into the biting cold and driving snow. 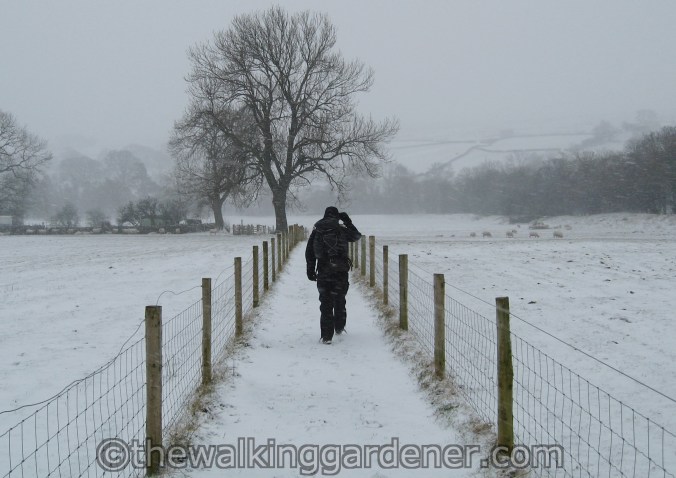 There were no extensive views today as the path wandered through woods and cut across farmland, with misty snowfall all about.

I suspect even on clear days, that this eleven-mile stage is a little low-key, after crossing the Lakes and the Pennines.  It was pretty enough, but there was no great excitement, no thrills.  But it would be a short day and I ought to stop grumbling.

The blizzard-lite conditions obscured the path and sleet scratched our eyeballs, making looking up ahead painful.

So, for the most part, I traipsed behind Pat, head down, singing show-tunes.

I’m sure in finer, clearer weather the views would have been gentle and pastoral but frankly, who knows? 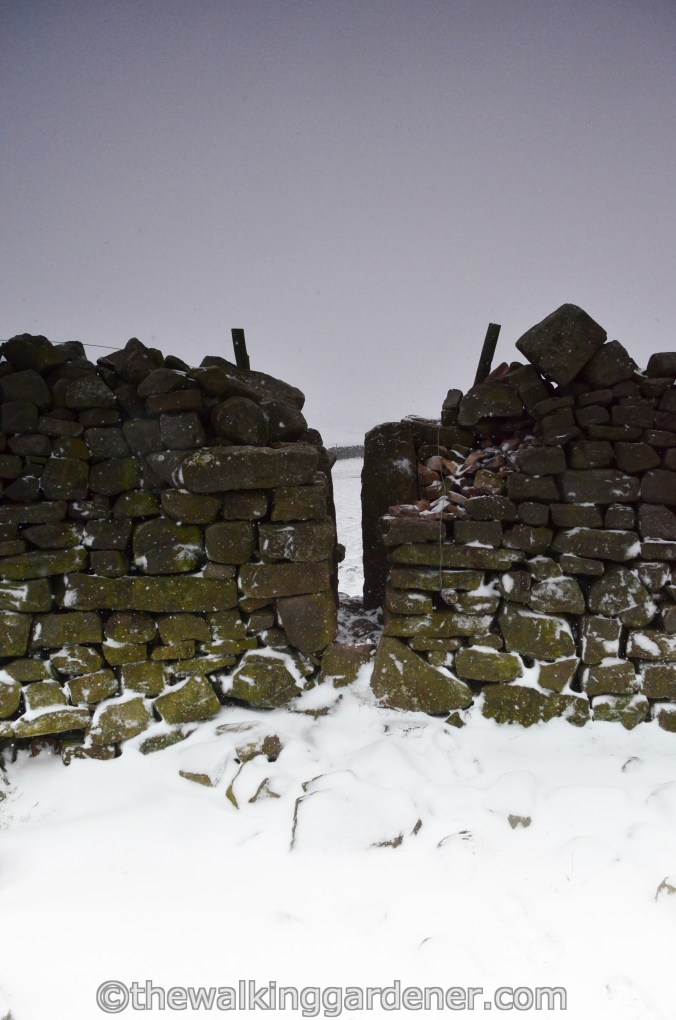 Squeeze stile. They could just put up a sign – “No fat thighs beyond this point”

Unsurprisingly the snow was untrodden, 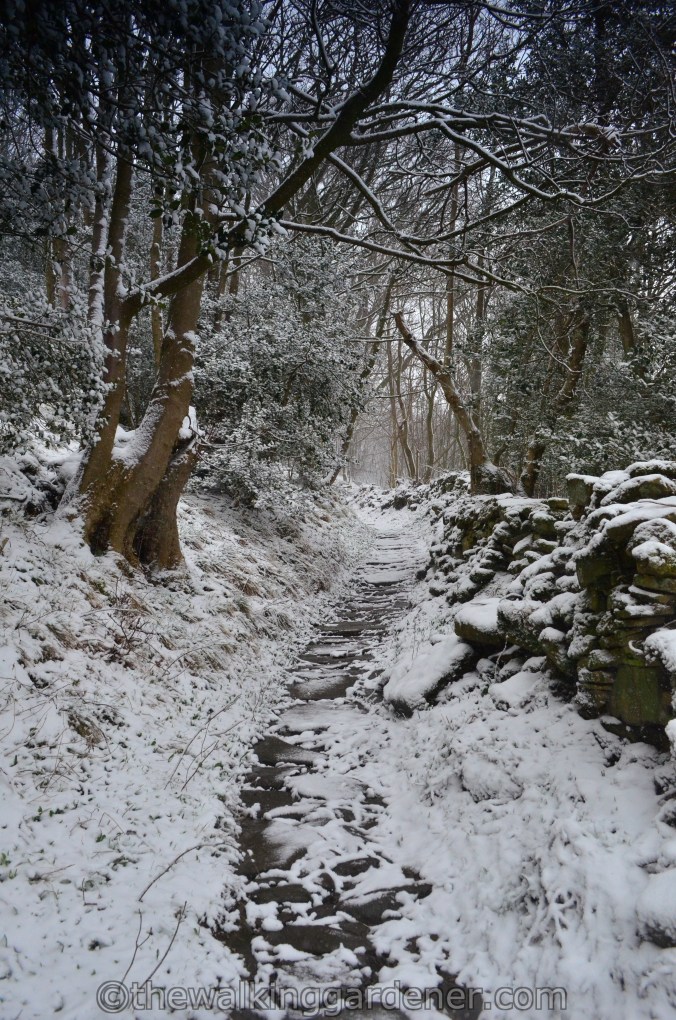 as we followed more of those always helpful, handmade signposts. 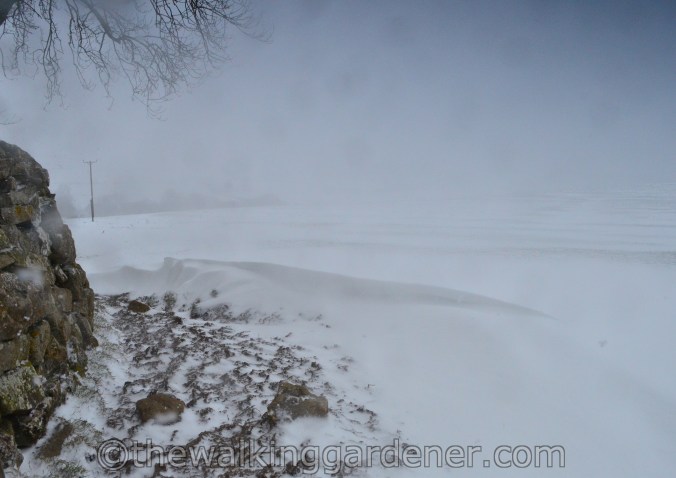 In places, the snow began to drift and as it continued to fall

flocks of hungry sheep came running at our approach.

We didn’t know at the time but thousands of sheep and lambs died in the coming days: buried by drifting snow, next to walls against which they had sought shelter. 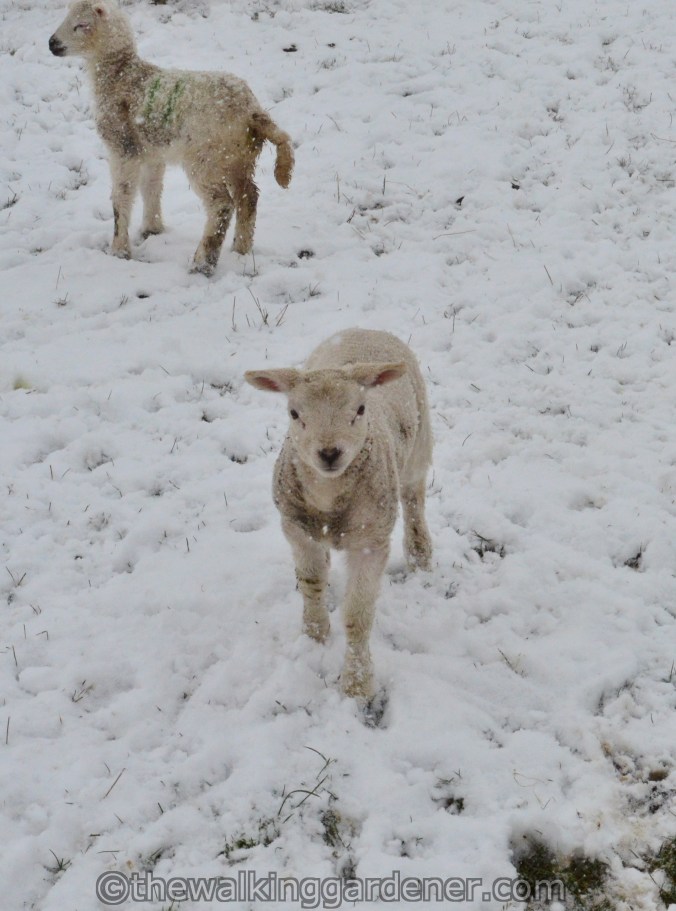 But not these sheep.  We were lower down and further east than the truly awful, sheep-killing weather behind us.

As we pressed on I continued to take photos and foolishly allowed my camera to get wet.  Really wet.

Though I rather like the effect on some of these shots

(especially this one) the melting sleet temporarily damaged my Nikon and caused auto-focusing problems in the days to come.

My Trailblazer guide-book mentioned this ‘white cairn’ and told us to head for it from the valley below.  Easily said, easily written.  It was a pity that it was invisible in the snow-storm until we almost bumped into it.

By 12.30, we were nearing Richmond and as once again I was in no great rush,

I bid Pat farewell, watched him speed away to meet Sue and, knowing how to have a good time,

crawled under a yew tree to eat a tuna sandwich and pork pie lunch.

With a pleasingly full stomach, the climb through Whitecliffe Wood was beautifully silent with Pat’s footprints already rubbed out by fresh snowfall.

As I emerged from the trees I realised that I was almost at day’s end.

There in the distance sat Richmond.  It was still only 1.30 as I entered the town and found a pub with an open fire (always a prerequisite) and settled down to thaw out and doze awhile, before heading to my B&B.

The focusing problem with my Nikon has already begun

I was staying at ‘Eliza House‘ and Liz, the owner, made me warmly welcome.

Later that evening, scrubbed, powdered and dressed in my specially packed evening wear, I met Pat and Sue at the ‘Black Lion‘ for a venison casserole and a few pints of Black Sheep.

We weren’t particularly looking forward to the next day: Day 9.  It was the longest stage of our C2C schedule (23 miles) across the reputedly dreary Vale of Mowbray.  There would be miles and miles of tarmac bashing, across a flat and uninspiring landscape.

4 thoughts on “Coast to Coast: Day 8 – Reeth to Richmond”

We Made A Garden, Part 2

Here’s more on the house and garden we bought in 2005 (and – spoiler alert – left in 2010). The front garden of the cottage was, as you can see, overgrown when we arrived and clearing the undergrowth was a major task. But hey, I didn’t care. I had my first greenhouse. As well as […]