As Radio 4 chatted away to itself, I worked ruminatively and efficiently through a scrambled egg and smoked salmon breakfast, all the while staring out at yet more falling snow. (Not for the last time).

I feared that after the grandeur and excitement of most of the journey, Day 9 would be a let down: little more than a dreary, utilitarian link between Richmond and the North York Moors.

Today would be the longest stage of my twelve-day trip and, looking out of the window, I wondered whether the snow was deeper to the east and whether it would be physically possible for me to cross 24 miles. I kicked myself for not packing snow-shoes.

Well, there was only one way to find out.

Setting out through the town, I noticed that the snow wasn’t quite deep enough to completely bury daffodils. Why it was almost spring-like.

But as I crossed the Swale, I couldn’t have hoped for a more wintry scene. (N.B. I wasn’t hoping for a wintry scene). I gazed down into the cold grey of the river and reminisced at being there at its inception near Nine Standards Rigg and having known it as a baby – a chuckling stream above Keld. How soon they grow up.

Pat texted and interrupted self-indulgent thoughts. He and Sue were having car problems and, as they were waiting for a mechanic, he would be late setting off. Today would be a long one and I was carrying a far heavier sack than he. I texted him back to say that I would set off, tortoise-like, and doubtless, he would soon catch me up, hare-like.

Before long, I had left Richmond behind and was plunging through woodland

and clambering over fallen tree trunks blocking my path along the Swale.

To be read with a Geordie accent

It was only a day or two later, that I finally realised that the auto-focus on my camera wasn’t working properly (see above photo) and I switched to manual focusing. Allowing my Nikon to get soaked the previous day had been careless and stupid. Though my camera would eventually right itself, several otherwise good shots were fuzzy or ruined. That was irritating. 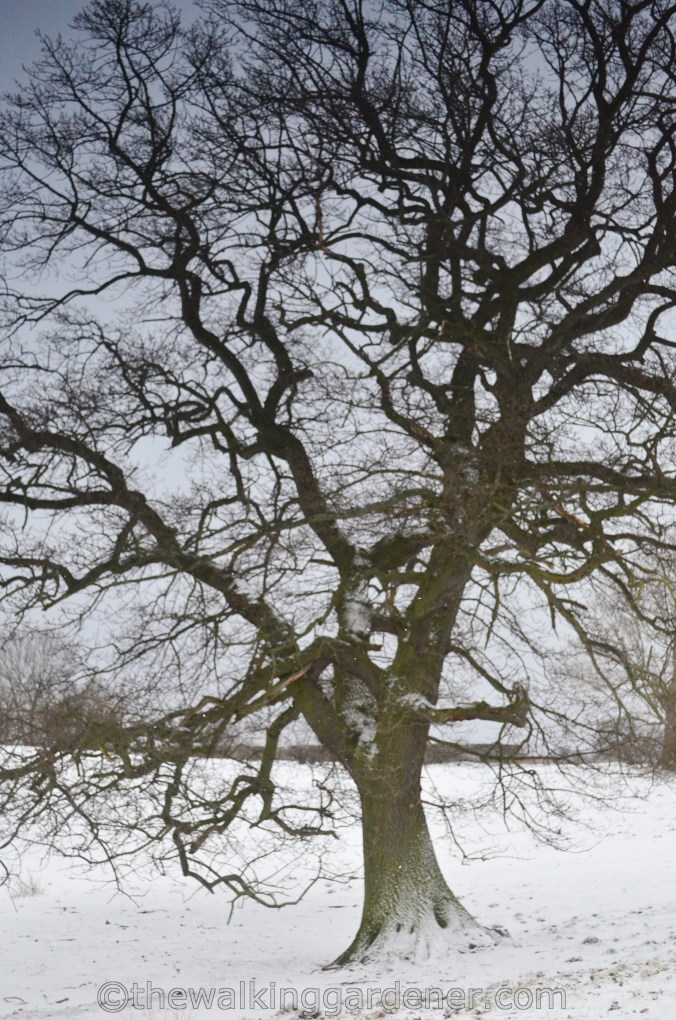 Though it remained very cold, within an hour of leaving Richmond it stopped snowing. As I walked eastward, the snow on the ground began to thin too until it disappeared entirely.

Worries that I would have to wade through snow drifts again floated away.

It was near Brompton-on-Swale that I chatted to a dog-walker. I’ve mentioned him before: he had walked the C2C the previous August and on every day, for almost two weeks, it had rained non-stop. Heavily. I commiserated whilst inwardly thanking my lucky stars. It hadn’t rained during my walk since the morning of Day 2 and it wouldn’t do so again. Though ‘my’ weather had been difficult and very challenging at times, I was elated at not sharing his glum experience.

As I ventured out into the Vale of Mowbray, the earlier snow gave way

to flood and mud.

But mostly, the path skirted the very wet bits. I covered mile after mile across unremarkable agricultural land

and after Bolton-on-Swale most of the walking switched onto metalled roads.

I am no fan of road-walking. Who is? But actually, this was OK. There was virtually no traffic and the quiet country lanes kept my feet off muddy, puddled paths and allowed me to shift up a gear.

As I plodded along, I began to fantasize about what I might have for lunch. Knowing from my guide book that there would be a pub lunch opportunity today, I hadn’t bothered buying food in Richmond. But what to order in the pub? A huge steak and kidney pudding? Or perhaps forget the kidney (and pudding) and simply have a huge steak? Or a huge healthy salad? A huge plate of pasta? Or both? I was so hungry that even the thought of yet more pub chips set me drooling. A huge burger with huge cheesecake afters? The possibilities whirled through my head like the wheels on a fruit machine.

I rubbed my hands – and belly – in wonderment at what ‘The White Swan‘ in Danby Wiske might have on offer.

As I rounded a bend and the pub swung into view, my stomach gurgled in anticipation. After 14 miles I was very hungry indeed. Managing not to trample anyone in my rush to the bar, I ordered a pint (first things first) and asked politely for the menu.

“We’re not doing food, I’m afraid,” replied the barman, “but there are these,” he added hastily (alarmed as a look of blue-murder rolled across my normally placid face) and nodded at a plate of cellophane-wrapped rolls.

I thumped my head against the bar once, once more and asked nicely for two of the rolls and retreated, crestfallen to a table. I was still grumbling to myself when Pat walked through the door fifteen minutes later. But his friendly face and the excellent bitter put me in a better, if still hungry, mood.

(To be fair, I hadn’t bothered to read my guide-book properly. It clearly stated that ‘The White Swan’ provided evening meals only).

My hungry afternoon evolved into a seemingly endless 10-mile squelch across boggy ground, along muddy paths 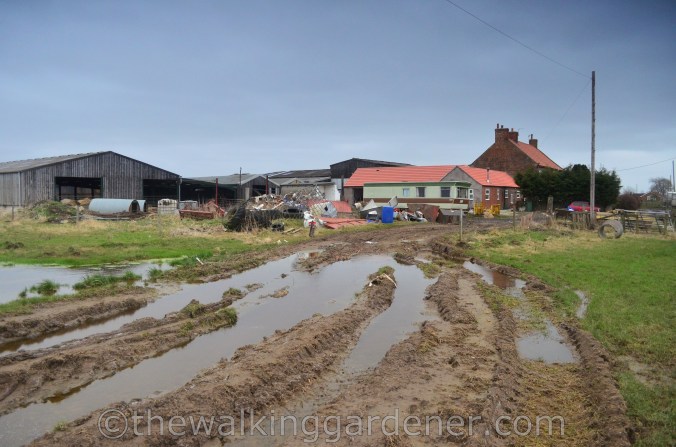 and past ugly, dispiriting farms. Spoiler alert. This section of my C2C was pretty rubbish. 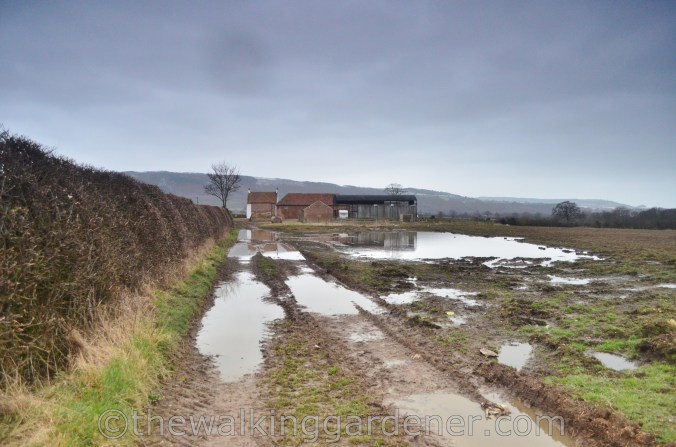 A little fed up with a tedious trudge into a cruel easterly headwind, I eyed the Cleveland escarpment eagerly as it drew ever-so-slowly nearer. I have twice walked the Cleveland Way (with which the C2C would walk hand-in-hand for several miles tomorrow) and I was looking forward to climbing up on high again and following a favourite trail. 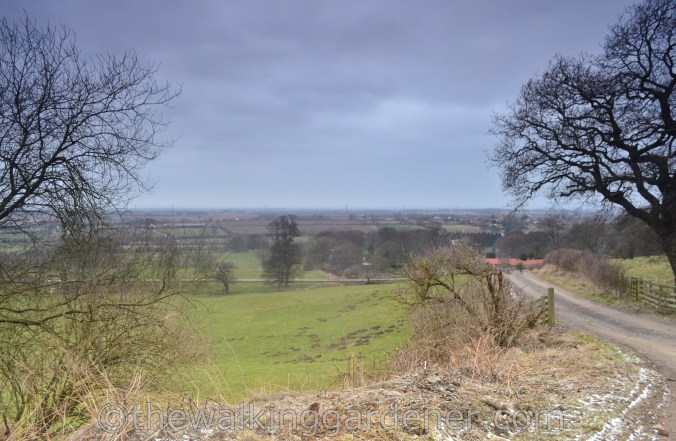 Looking back at the Vale of Mowbray – and good riddance

Finally, at about 5pm, and after almost 9 hours walking, Pat and I staggered up the final mile from Ingleby Cross to ‘Park House’ – our stop for the night and where Sue was waiting for us. 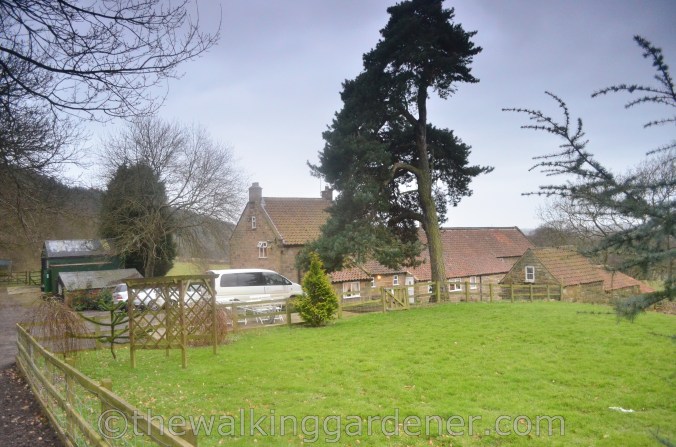 After a shower, I sprinted to the dining room and sat, knife and fork in hand, impatiently waiting for my dinner. It was well worth the wait. We were served a fabulous, hearty stew and dumplings followed by an Eton mess that had me purring and scraping my plate until I was told to stop.

It was a shame then that my room out in an annexe was achingly cold. When I returned to it after dinner, the heating was off and I had to don several layers before edging between icy sheets. (When Julia Bradbury walked the C2C for the BBC she stayed in this very room. I hope, unlike me, she packed a hot water bottle).

Thankfully, I was so tired that even my chattering teeth couldn’t keep me awake and soon, still shivering, I was fast asleep.Save

6 thoughts on “Coast to Coast: Day 9 – Richmond to Ingleby Cross” 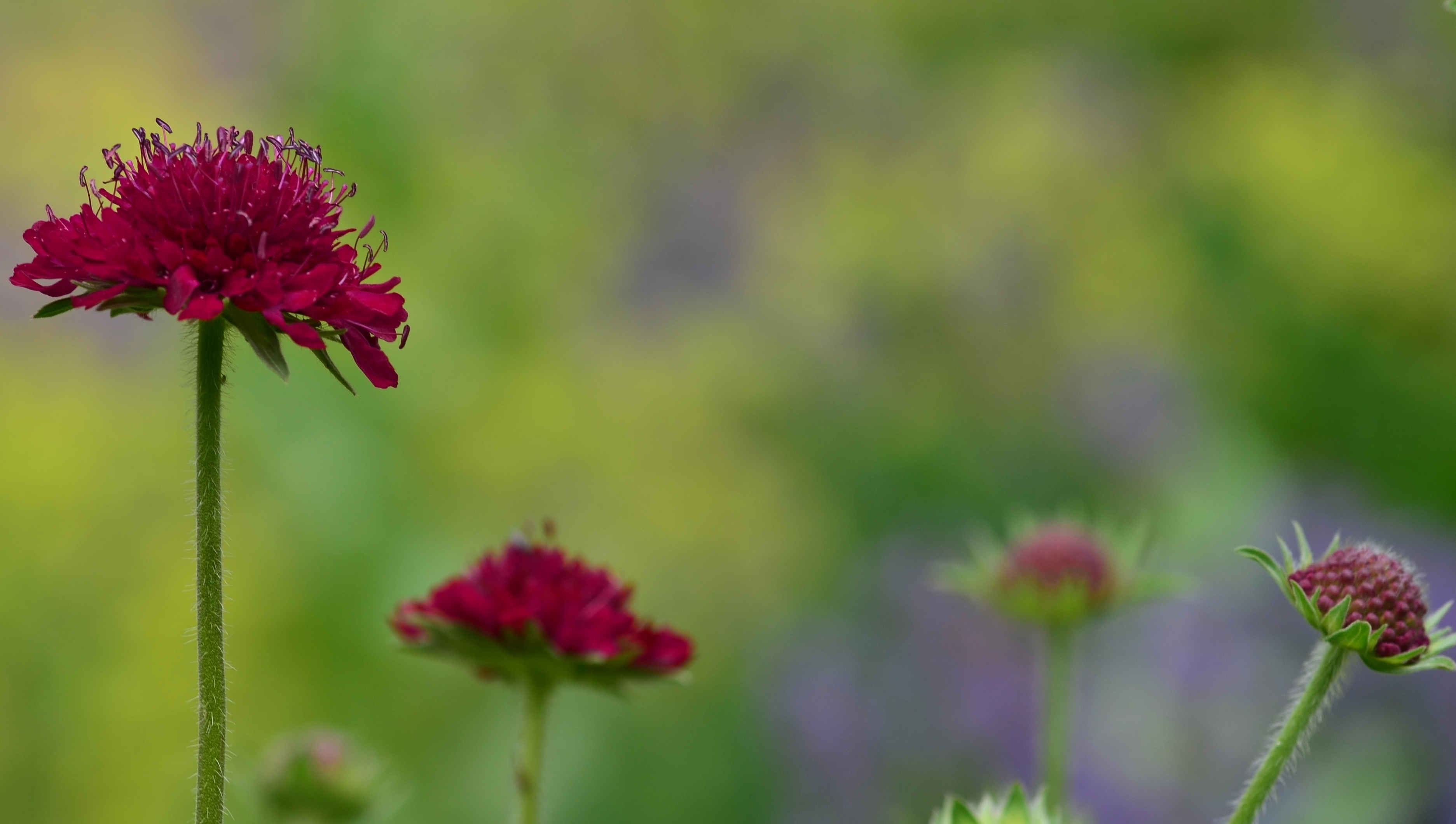