From a distance, the Cleveland escarpment resembles a saw-blade and those sharp peaks and troughs mean six steep climbs between Ingleby and Blakey.  It would be an exhausting day; but also one of the most exhilarating of my C2C.

Breakfast was later than I would have liked but eventually, at about 8.30, Pat and I got away and immediately began our first climb of the day – up through Arncliffe Woods.  After a mile, a finger-post welcomed us onto the Cleveland Way which the C2C would follow for most of the day.

Me leading the way for once. Pat’s photo

I first walked The Cleveland Way when I was 19 and though it wasn’t my first long-distance footpath, it immediately became my favourite.  It might still be.  I’ve completed it again since I was a teenager and I’ll happily return for a third time.

It is a grand footpath, circling the North Yorkshire Moors and then following the coast from Saltburn to Filey.  And I think this stretch between Osmotherley and Kildale is as fine a day’s walk as you’ll find anywhere in England.  But easy it ain’t.

and the climb then continued to Carlton Moor.  It had been bitingly cold and windy all morning, but as we neared the 1640ft summit the headwind became so strong that not only did we struggle to stay upright we even had difficulty pulling the fast moving air into our lungs. 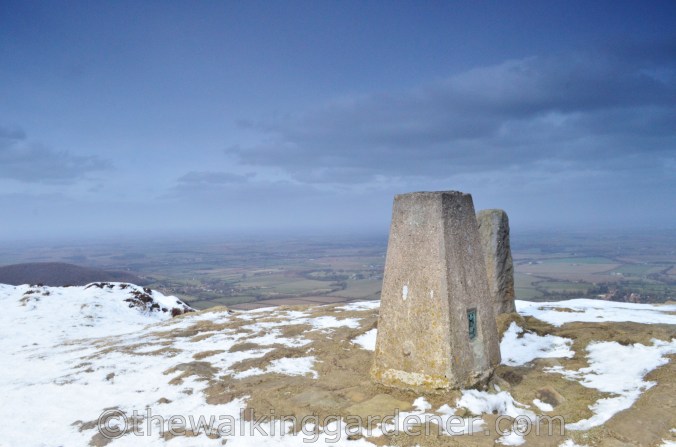 At the summit trig point, we leaned into the wind to avoid being bowled over but even so I was sent sprawling if pretending that I hadn’t.

A little alarmed, we bent once more into the wind and started the descent. 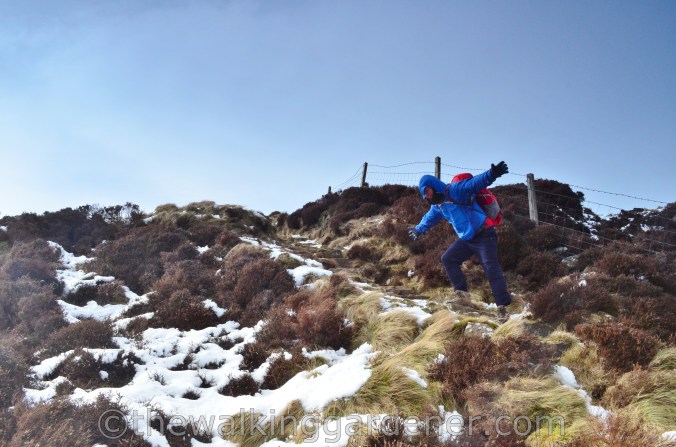 Pat trying to demonstrate just how strong the wind was. 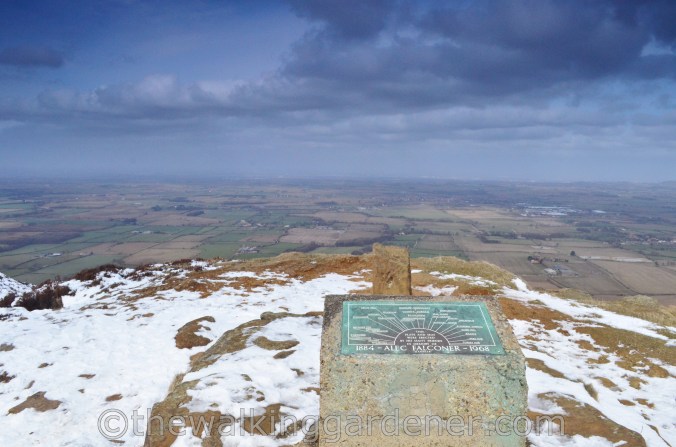 Our third climb was up to Cringle End.  The gusting easterlies and northerlies were a little less strong here

and we nabbed a few minutes rest on the Alec Falconer memorial seat.  But if the winds weren’t as strong, the cold was just as perishing.  We didn’t hang about. 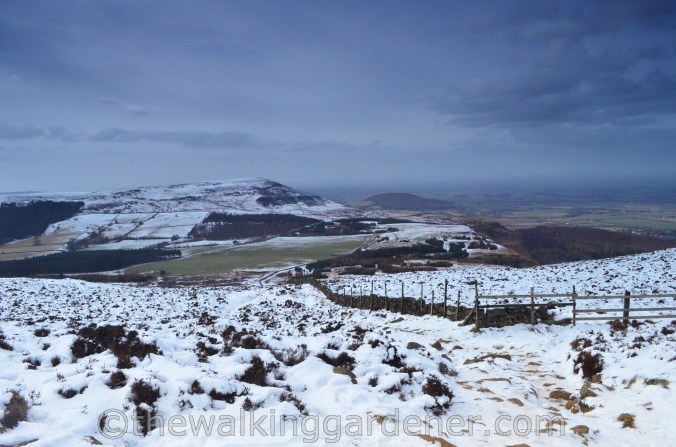 Cold Moor with Broughton Plantation below it

whilst ahead the escarpment led on toward Clay Bank. 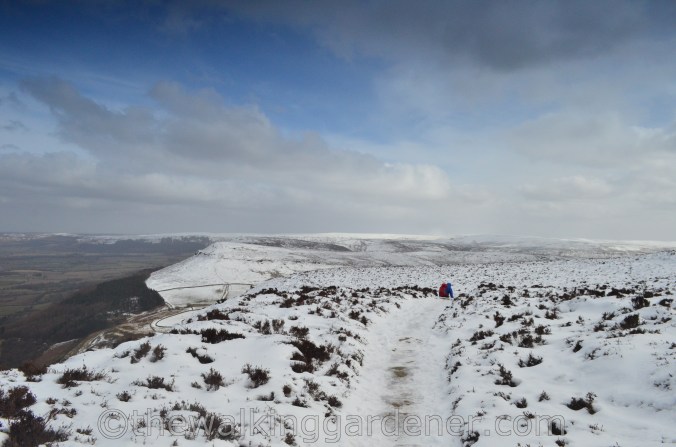 Though we were in a rush to get off Cringle End’s summit, the icy path and crosswinds forced a slow pace.  I didn’t fall over again though.

At the foot of Cold Moor, I said farewell to Pat.  He was meeting Sue a mile or so ahead at Clay Bank and driving to an off-route village for the night.  But from Clay Bank, I would have a further 9 miles before bed.  Happy to avoid two of the day’s six hills, I used the path along the foot of the escarpment through Broughton Plantation.  It’s called cheating.

The path through the forest was out of the wind and I found a sheltered spot for lunch.  Whilst I sat on a rock, munching sandwiches from Park House, I watched contentedly as Pat slogged up to the Wain Stones (outcrops of rock on top of Hasty Bank).  I’d made the right decision.

The day had remained bright and so, halfway up, I did a rare thing – sitting out of the wind under blue skies and watery sunshine;

before continuing the relentless climb.

I needed frequent stops to drink in that view and pull in huge lungfuls of freezing Yorkshire air.

Then I would tuck in my chin and climb some more.

At two o’clock, I was at the top of the last hill of the day and the penultimate big hill of the trip.

Ahead of me was about 8 miles of mostly level, if Arctic, moorland.

There may have been no climbs on this section but I still had to battle into that wearisome headwind for the rest of the day: powerful, excoriating and painful, it scraped my face red-raw. 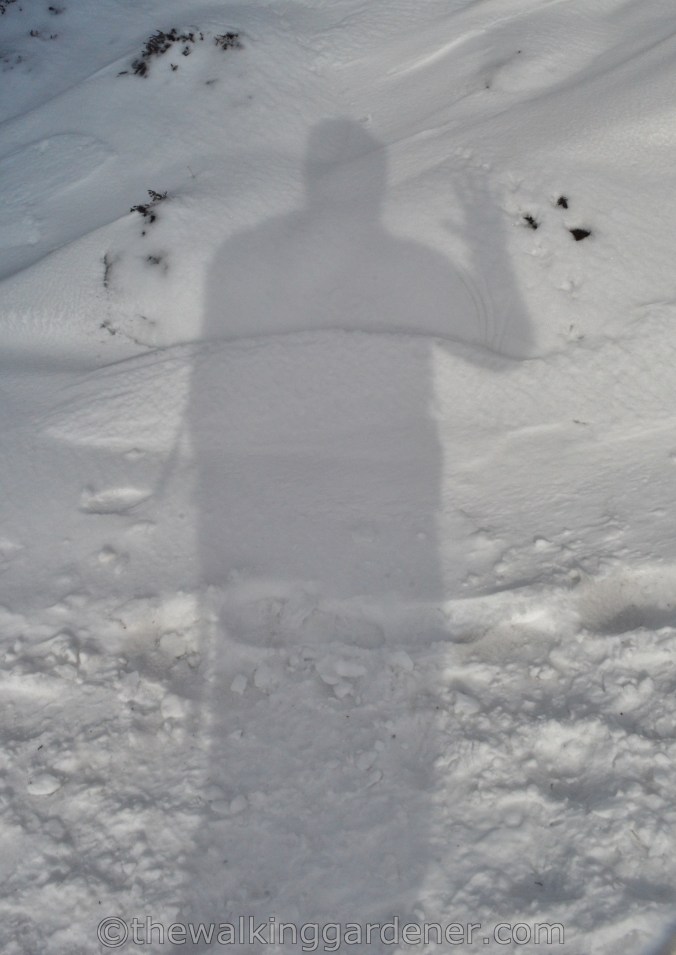 Occasionally there was enough sunshine to provide some fleeting, fickle company. 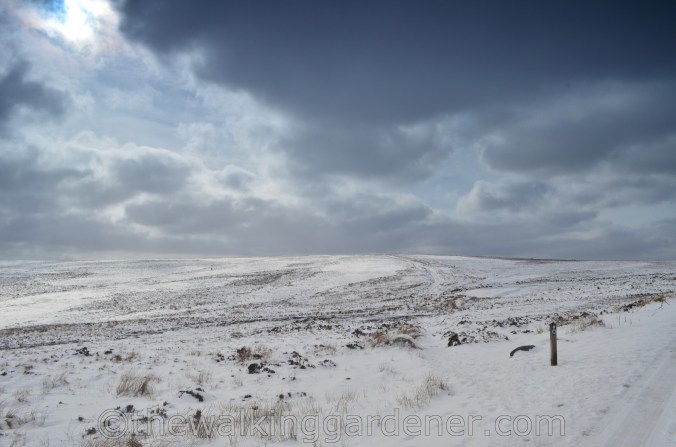 I saw, at a distance, only two other people in that wilderness 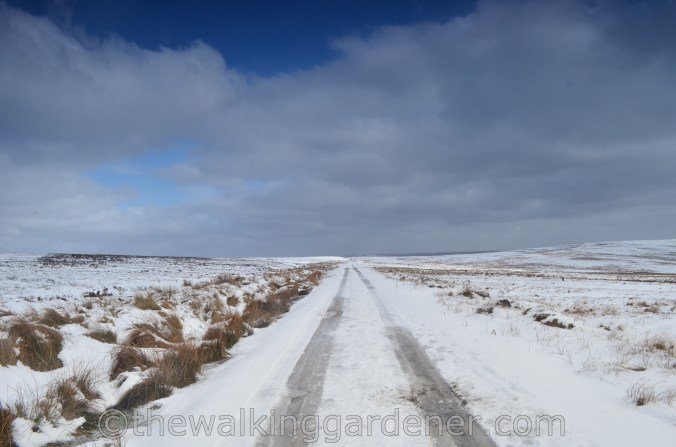 but for three hours and 8 miles, I didn’t meet anybody.

Eventually, at Bloworth Crossing, I left the Cleveland Way for now (we would meet again near Robin Hood’s Bay) 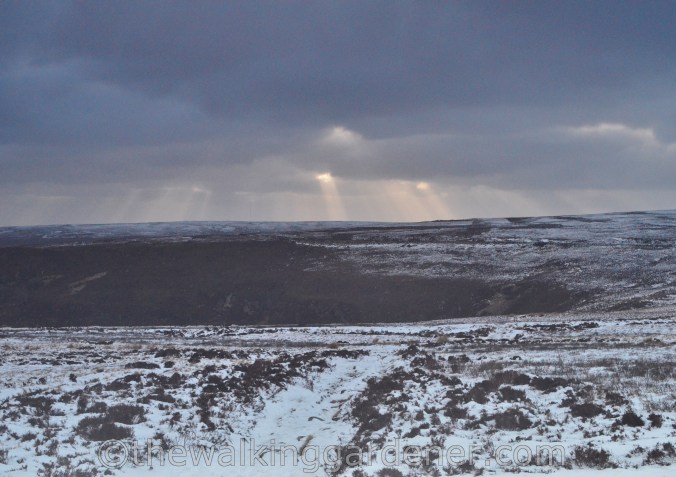 and then sped up along an old railway (built to transport iron-ore from nearby Rosedale to Teeside and Durham).  It was getting late and I didn’t want to be out here in the dark.

The Lion Inn on the horizon, centre

Toward the end of the afternoon, I glimpsed ‘The Lion Inn’ – my goal for the night.  But it was still far, far away on the horizon and I wouldn’t reach it till almost 5 o’clock.

‘The Lion Inn‘ is a remarkably remote pub, set in a bleak landscape.  It dates from 1533 though, from the outside, you’d be forgiven for thinking otherwise. 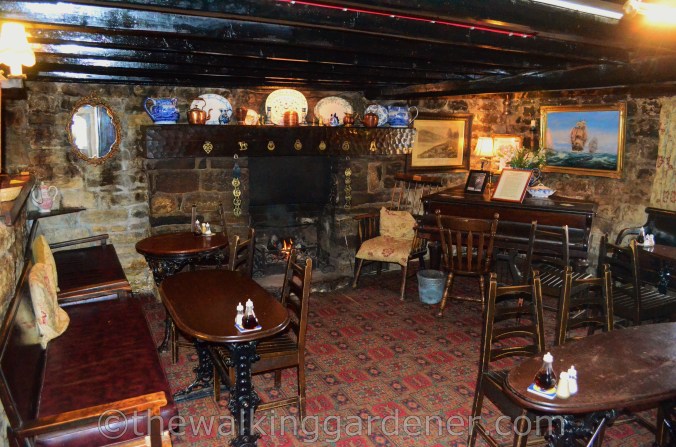 But inside, the pub was aged, gloriously warm, warren-like, cosy and very, very busy.  After that long, tough march across the moors, it was a bit of a shock to be thrust into a crowd of loud, raucous folk.  Like arriving at ‘The Prancing Pony‘ after crossing the wilds, I should think.  And it is one of only a couple of pubs I have ever stayed in that actually felt like an ‘Inn’.

After wallowing in a long, hot bath, I returned to the bar for excellent food and ale, if not for long.  After completing almost a quarter of the C2C in two days, I was soon back upstairs and fast asleep.

Tomorrow would be a far easier day but I was increasingly aware that the end of my winter trek was drawing to a close.Save