And so the end.  After fifteen consecutive days of walking across England, the finish tape was a hop, skip and jump away. 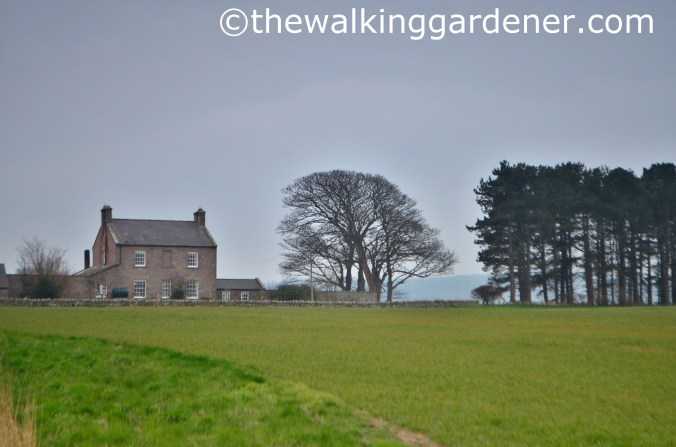 But first I had a pressing engagement with a cooked breakfast … and vowed not to have another for a long, long time.  I happily go months without a full English until, that is, I lug a big rucksack across country.  Then it is every man for himself.

I had lost half a stone in these past two weeks but wondered what I’d weigh if not for all the fried food, the pub grub and the ale.  What if I’d eaten muesli for breakfast, salad for tea and quaffed only mineral water?  Glum certainly but a stone lighter?  Two?  Predictably, these thoughts evaporated instantly when presented with Fenham Farm’s excellent grand finale. 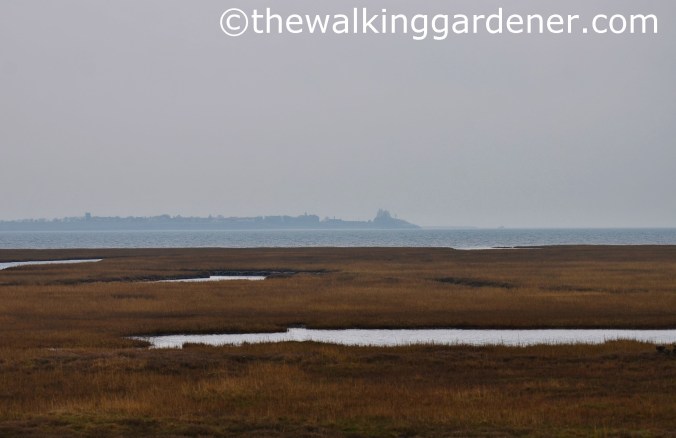 After packing up, paying up and saying our goodbyes, we took off on a path across salt marsh toward Lindisfarne and a brief reunion with the St Oswald’s Way. 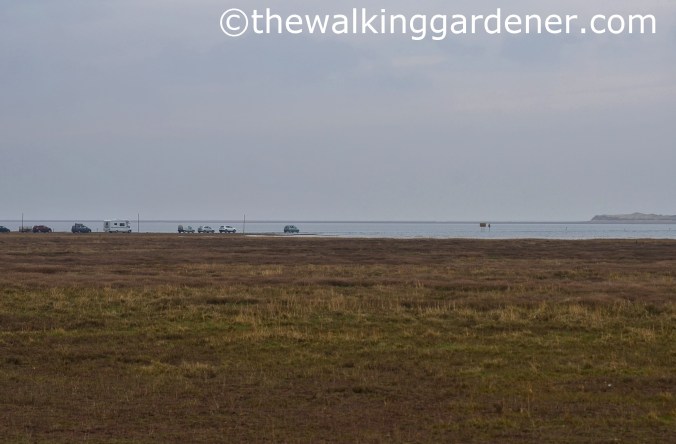 The Lindisfarne causeway under water

Months earlier, during the planning stage, I had decided not to include the island on my itinerary. Though I wanted to see Holy Island again, having visited before, the tides dictate a limited window for a day’s visit on foot.   (Twice a day, at high tide, the causeway is under water).  I particularly wanted to finish my Coast to Coast at Berwick and so, when I learnt that B&B’s on Lindisfarne don’t generally take one night bookings and as I was pressed for time, the island got relegated.

As we crossed the road leading to the causeway, traffic was waiting for the tide to ebb;

some more impatiently than others.  We left the official SOW behind now to continue on the Northumberland Coast Path – whose route we had shared since Warkworth.  (The SOW finishes on Lindisfarne but my guide-book included the extension to Berwick as an optional add-on).

WWII anti-tank defences still line this coastline and, given how unaffected they are by 70 years of erosion,  I suspect they always will.

We bundled into a bird-hide, were about to bundle out again when up popped a meadow pipit.   Sweet, huh?

But, as usual, Jim and Tracy weren’t as interested as I.

Today was only the third of my fifteen days when the sun refused to play.  But skylarks still sang: as they had done so often for the last 200 odd miles. 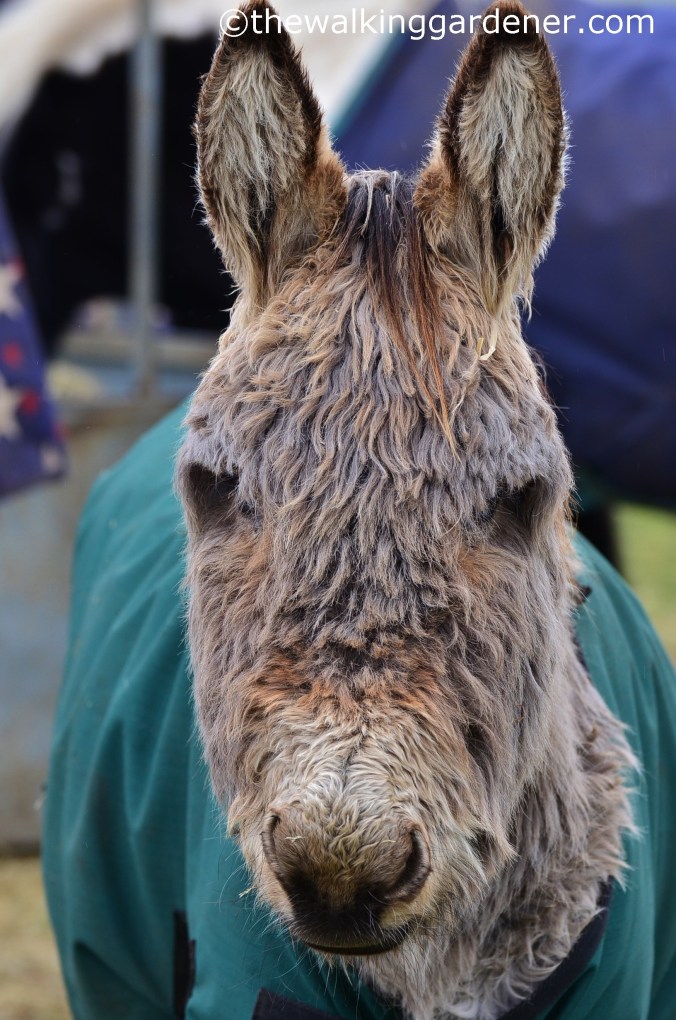 I do, and paused to pet this greasy, noisome one and wondered idly about buying Ned to carry my rucksack across country.  If, after all, it’s good enough for Robert Louis Stevenson …

I did not pet seaside cows however nor

salty sheep.  Good grief, but I’d seen a lot of sheep on my walk.  (As of December 2012 there were 22.9 million sheep in the UK … and I figured most of them had lined my route).  These were the very last. 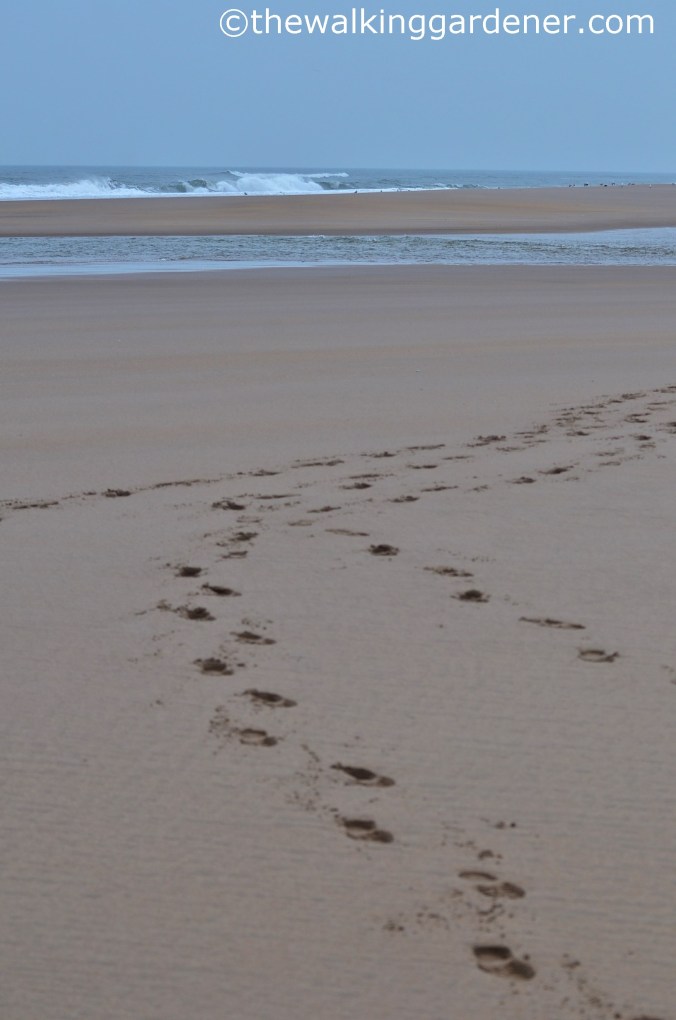 Avoiding the second world war bombing range at Goswick Sands (with its sage signs warning against prodding curious lumps of metal on the beach), we re-joined sand for the final time

and carried on northward.

Tracy leads walks for the Ramblers and often has twenty or more acolytes in tow.  Personally, I find the thought of a large, raucous walking-group unsettling.  I far prefer either lone-walking or drifting in and out of chat with a couple of chums.  It’s my age, I suspect. 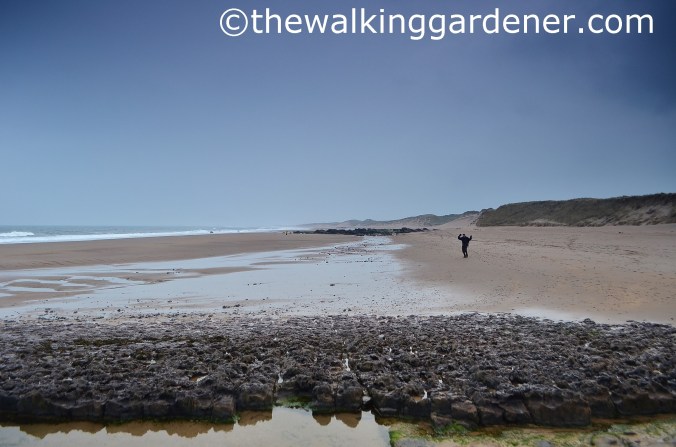 Traipsing along Cheswick Sands, I turned around for a backwards glance only to catch Jim dancing the Charleston.  Nope, I have no idea either. 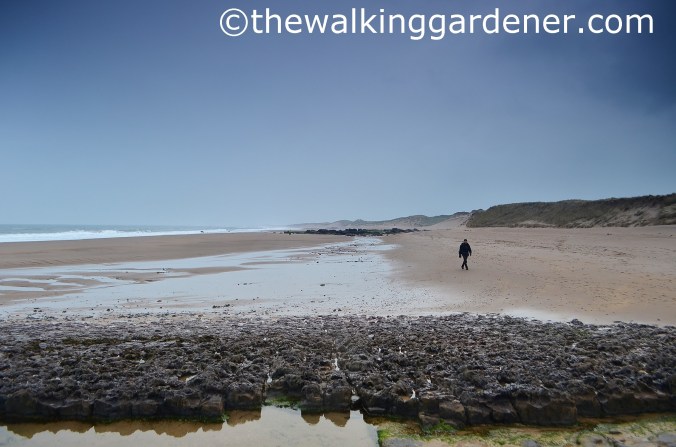 I sighed and waited for him to stop.  But actually, sans Charleston, the photo was poorer. 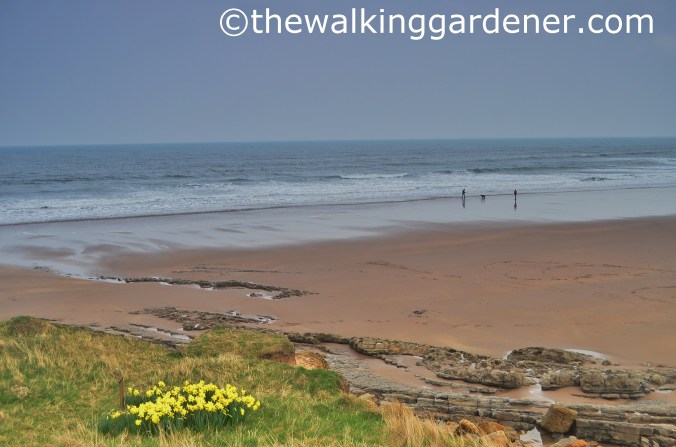 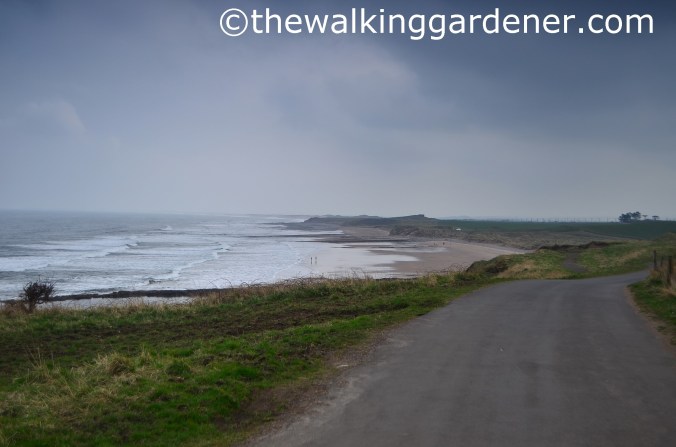 Looking back along Cheswick Sands

A final stretch of grassy cliffs carried us within sight of our goal: Berwick-upon-Tweed.  Only three miles from the Scottish border, Berwick was captured or ransacked thirteen times before finally becoming English in 1482.  (Not everyone is happy with that outcome.  A couple of people I met, told me that they felt more allied with Scotland than what they consider a distant, disinterested Westminster). 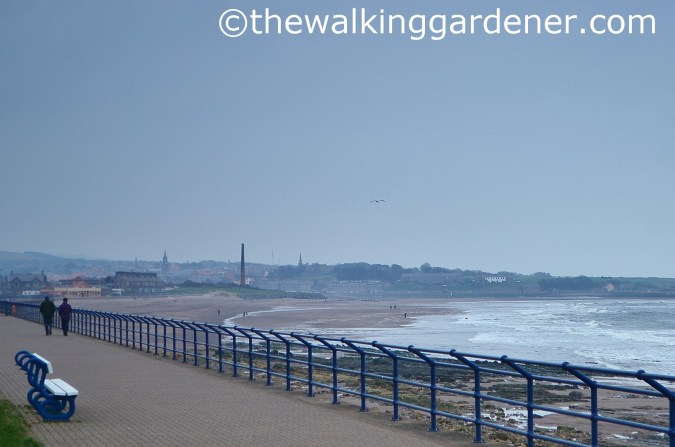 We dropped to the promenade at Spittal and a sudden return to the urban.  Town outskirts are often desultory and I’m afraid Berwick is no exception. 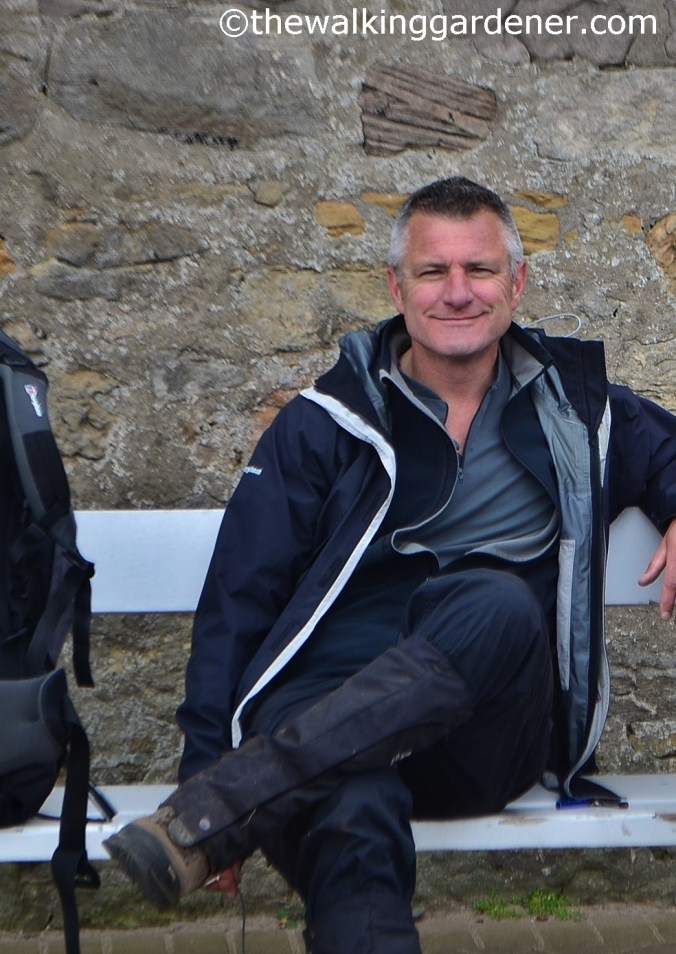 But I wasn’t too bothered: my march across England had been hugely satisfying and I was very chuffed at its completion.  I’d walked every inch from the south Cumbrian coast on Morecambe Bay to (almost) the Scottish border on the North Sea which, I roughly calculate, is 460 000 steps.  (I didn’t count them).

At 2pm, Tracy – tugged onward by the prospect of food and drink (we’d had nothing but water since breakfast) – surged ahead.

Are original Berwick cockles no more?

I’m very fond of Berwick but it has fallen on harder times since I last saw it. 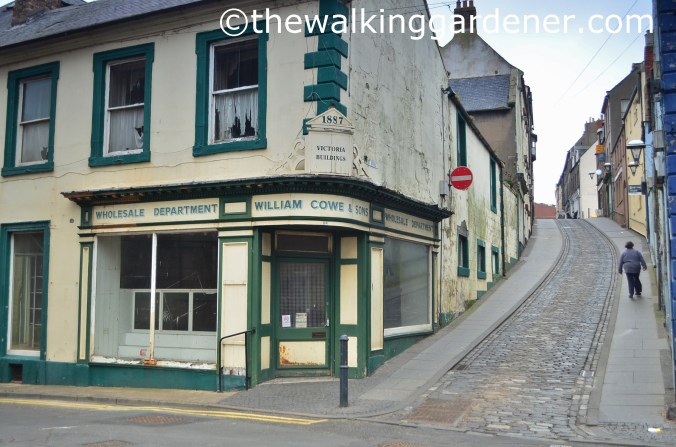 Straddling the Tweed, with an almost complete Elizabethan town-wall and beautiful buildings, Berwick ought to be handsomely prosperous.  But sadly it has a depressing air of poverty and neglect.  No Northern Powerhouse here.

After a swift celebratory pint, we met our smiley-friend Jo who whisked us away to her converted Victorian school home a few miles distant.  I tried to hide my jealously at her gorgeous house … but doubt I succeeded.  Waiting there were Jo’s partner, Andrew (my new best friend of 2014) and our walking buddy from SOW Day 4, Jonquil.  After we smelly walkers had vigorously showered and changed into moderately clean clothing it was party time.  We ate great food, drank far too much, talked over one another and I laughed till my jaws ached.  I couldn’t have wished for a better end-of-walk full stop.  Thanks, Jo and Andrew.

The following morning, and still a little groggy, Jim, Tracy and I returned to Berwick for our train home.   And as we swept past Alnmouth, Newcastle and York, I mulled over my longest path to date.  I’d crossed my favourite county – Cumbria; become intimate with a new love – Northumberland; rubbed sweaty shoulders with Emperor Hadrian and his marvellous edifice; seen more castles than, let’s face it, were strictly necessary; climbed mountain peaks; crossed empty fells, high moorland and thick forests; followed miles of streams and rivers; passed under vast, show-off skies (with rainbows); suffered just enough rain to remind me how lucky I was not to have suffered more; suffered sunburn; suffered serious back pain; suffered a sorry lack of red squirrels; suffered not one blister in 228 miles; carried a camera tripod the entire distance for no discernible reason; and, outrageously, been mugged.  By a horse.

The joining of The Cumbria Way, The Hadrian’s Wall Path and The St Oswald’s Way into a single Coast to Coast trek had worked seamlessly.  Would I recommend it?  You betcha … and I like to think that I’ve given Mr Wainwright’s a run for its money.  Scenery, wildlife, sunshine, sheep and damn good walking aside, I also met some thoroughly decent people.  And that is often an underrated bonus to any walk.