And so this was my final day on the South Downs Way; and if I had whinged and moaned about the weather yesterday, somebody took note.  It was cold, it was windy but the sun shone and I had more photogenic fluffy clouds than I could shake a stick at.  I also had Jim, my partner, for company and later our friend Annie would join us too. 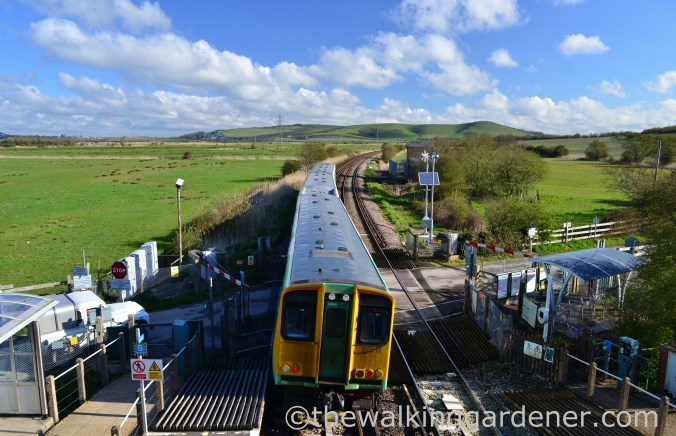 The SDW leading to Itford Hill

It was about 8.30 as we crossed the footbridge over the A26 and began the first of today’s dozen climbs.

Years ago, the path bounded to the top of Itford Hill in one straight, punishing leap.  But countless feet and mountain bikes cut deep into that thin downland soil.  To ease the erosion, the route was diverted to a longer, slower, curved farm track.  This diversion better shows off the Ouse valley, with views – 3½ miles distant – of Lewes at the northern end of the valley:

though we need my zoom lens to see the market town and castle clearly.

Swivelling my lens across the valley, Southease village looked a lot less gloomy, a little more welcoming than the day before. 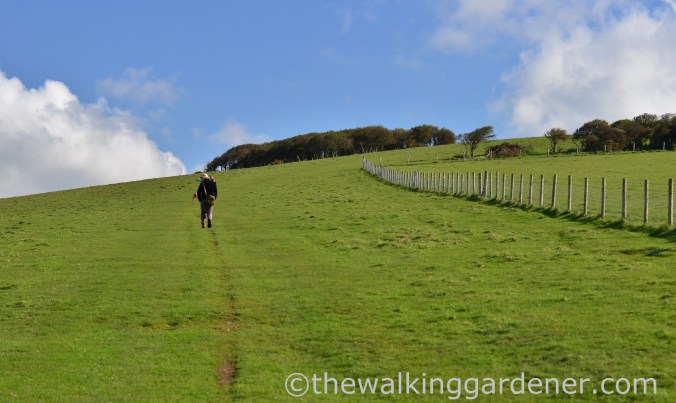 As I fiddled with my camera, Jim surged on up the hill and I ran, muttering, to catch up.

To our right, where the Ouse meets the sea, lies Newhaven.  The Ouse originally found the sea at nearby Seaford but a huge storm in 1579 blocked the estuary and diverted the river westward.  A new harbour was built at ‘New Haven’ and Seaford, no longer a port, slipped quietly into relative penury and obscurity … until the coming of the railway and its rebirth as a seaside resort. 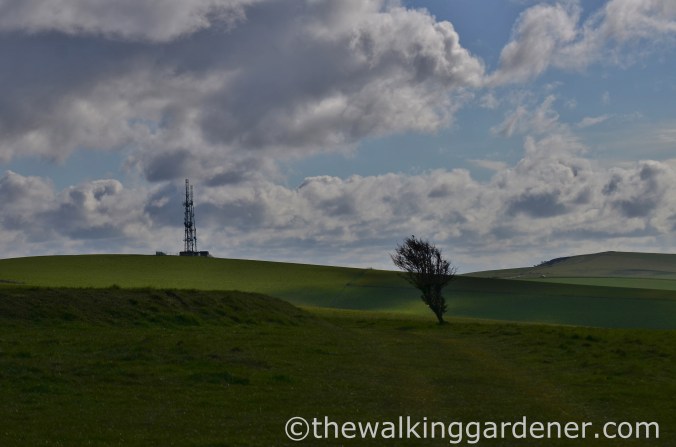 Beyond Itford Hill, our next target was the telecommunication masts on Beddingham Hill

which they really, really don’t want you to play on. 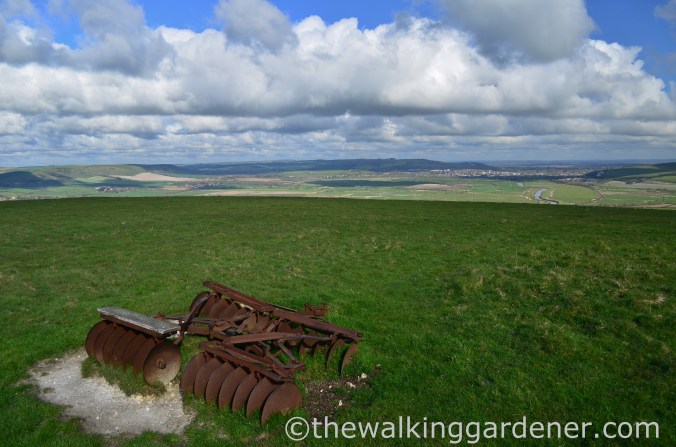 Nearby, an abandoned harrow has been adapted as a makeshift bench.  It sits nicely here, high up on the Downs and if it wasn’t purposefully placed, it ought to have been.  You may play on this. 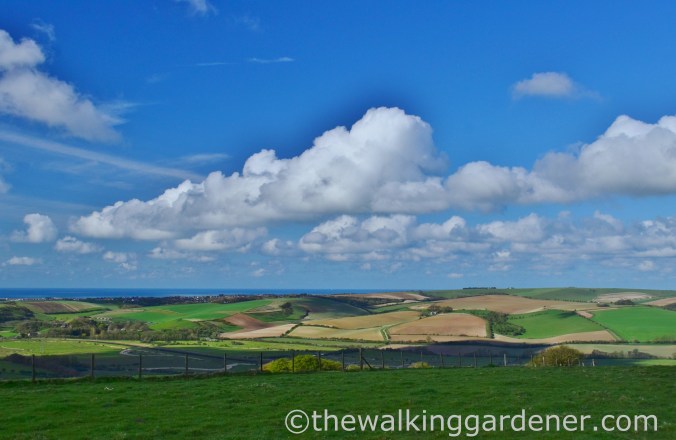 Close to my home, this seven-mile stretch between Southease and Alfriston is my favourite part of the ‘Way with huge skies over the Downs, English Channel and Weald.  Soft grass underfoot and extensive views all about, make this the very best of Downland walking.

For most of my walk, the trilling of skylarks had been a constant but I rarely saw a lark other than as a black, climbing speck far above my head.  A shame really as close up they are a pretty, little thing – as you can see.

Today was Saturday and the path was fairly busy;

but even so we had long sections to ourselves and very occasionally, when Jim paused for breath, I even managed to slip a word or two into the conversation. 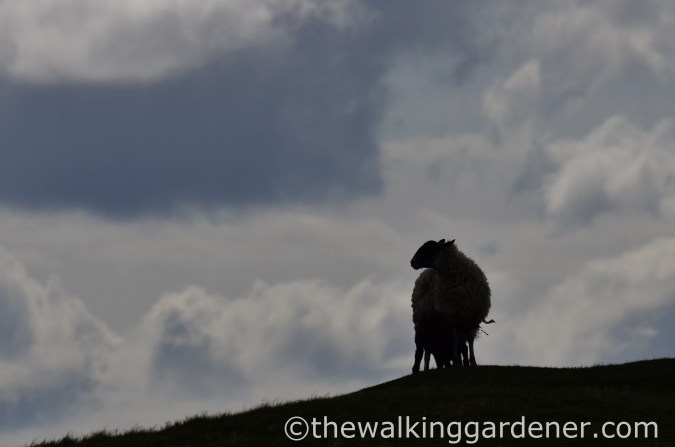 “As God is my witness, I’ll never be hungry again!”

Animals can be so darn melodramatic: a ewe over-eggs her Scarlett O’Hara audition; 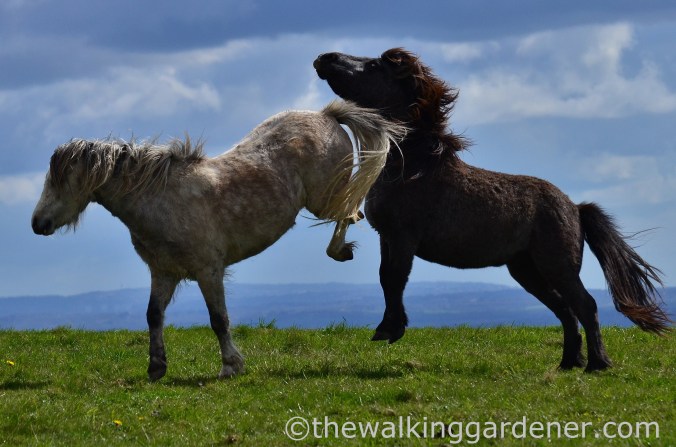 and these two ponies put on a magnificent, 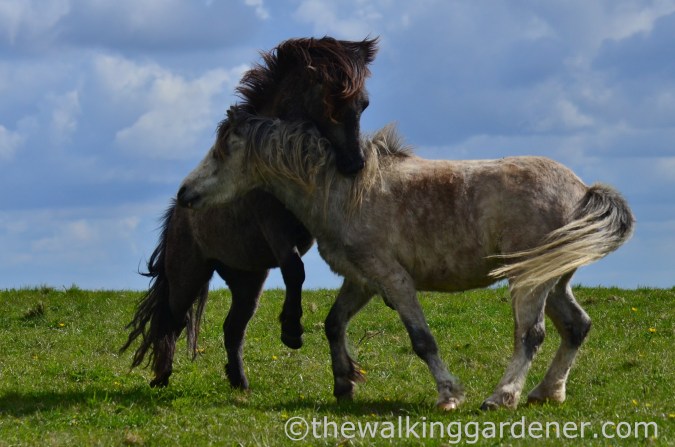 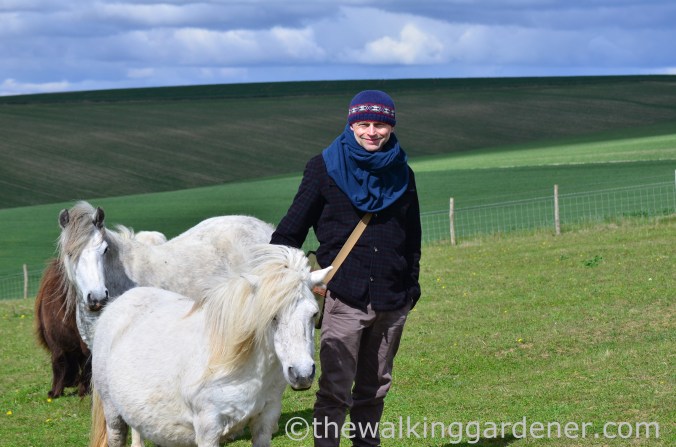 After they’d calmed their spring-time exuberance, the ponies were safe to walk amongst and for Jim to pet. (His hat was knitted by his Mum and I wore its matching, green twin … which I’m not going to show you). 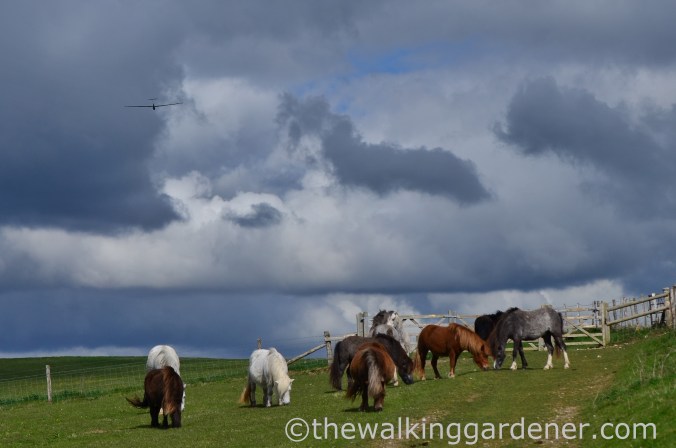 Some of these ponies are semi-wild Exmoor ponies and have been introduced to graze on invasive grass species as well as young gorse, bramble and blackthorn.  The ponies help to maintain the close-cropped, chalk-turf habitat and halt its natural inclination toward scrub and eventual forest.  There’s more information about the use of these natural lawn mowers – here.

Ideally, every walk should include a mid-morning snack destination and ours was the village of Alfriston.

With our stomachs gurgling for want of pie, I didn’t spend too long studying a goldfinch; 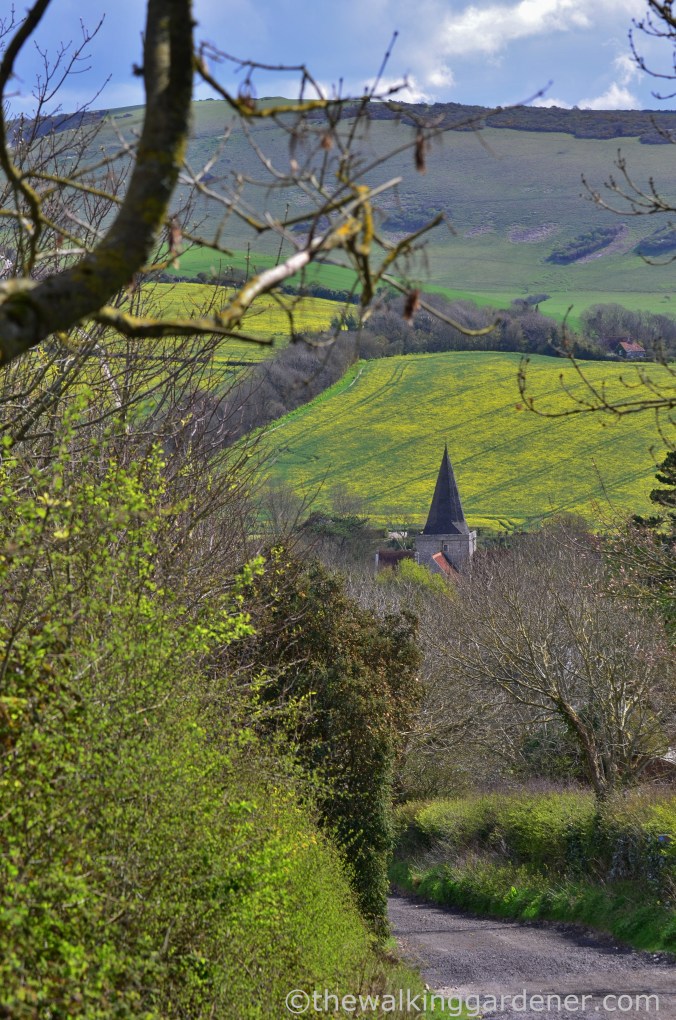 Stuffed with sausage, we passed through the village, bumped into one of Jim’s Ladies of Alfriston (for whom he gardens) and then pulled away along the banks of the River Cuckmere. (From Alfriston there is a choice of routes to Eastbourne.   If you’re pedalling or on horseback, you must take the more mundane inland bridleway via Jevington.  But if you’re on foot, and don’t mind the extra hills, there is really only one way to go: Cuckmere Haven and the Seven Sisters coastal path).

Heading south toward the sea, we glanced at the Litlington White Horse – but only glanced.  It is modern, cut in 1924 and not particularly accomplished, as the legs testify. We strolled on through the village of Litlington and dived into Friston Forest.

There’s a mile or so of woodland before West Dean village, followed by an evil flight of steps.

At the top, we emerged from the trees above Cuckmere Haven: the meandering end to the river.  Here I met the only other full-back-packed hiker on the ‘Way – besides the outward bound youngsters the day before.  He had set out this morning from Eastbourne and looked knackered, frankly.  We compared notes and I wished him well for his remaining day’s walk to Rodmell.  He looked so tired, I didn’t have the heart to tell him that, in my opinion, he was walking the path in the wrong direction.  I’m quite kind like that.

It was above the Haven that friend Annie (the best cook I know) was waiting and, after hugs, the three of us set out on the last seven miles to path’s end.

With a large car-park, and easily reached by bus from either Eastbourne or Brighton, the Haven is always busy and especially so on a fine Saturday.  Between here and Eastbourne was the busiest section on the South Downs Way.

Often, as we three walked along, I’d lag behind to photo something or other – like this white egret (which couldn’t be bothered to face the camera). 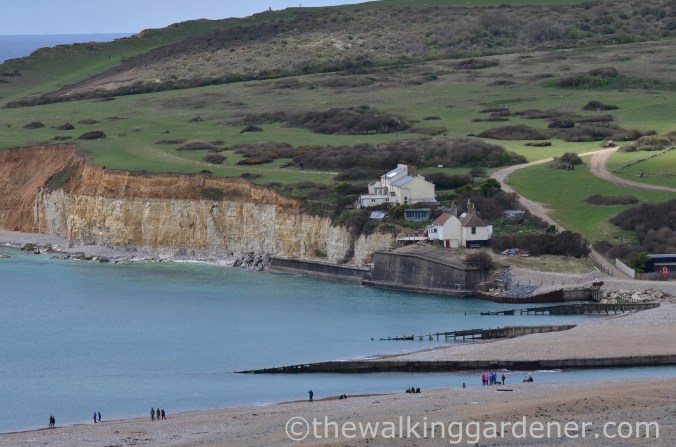 The coastguard cottages at Cuckmere Haven are world-famous, if not particularly from this angle.  I guarantee however that you will recognise them from the west:

Thought so.  The view from above the cottages looking east also shows off the Seven Sisters better and the exhilarating climax of the SDW. 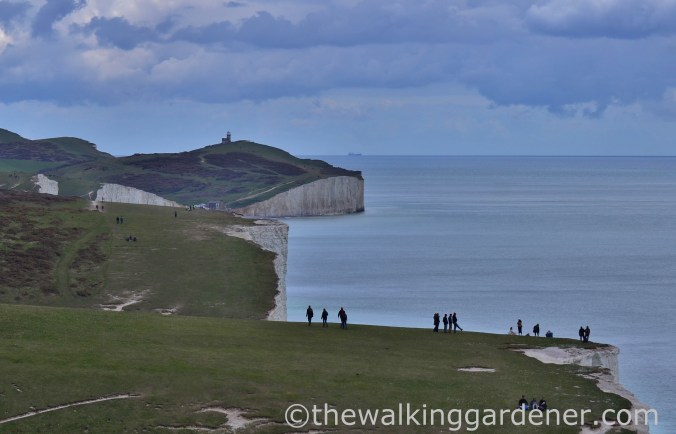 Between Cuckmere Haven and Birling Gap, the Seven Sisters present a tiring challenge.  Each of the Sisters is named:

and each, of course, is a stiff climb.

After Birling Gap, there are two further climbs before The End.  A nine-hill, afternoon finale then and I was grateful for a lightweight day-sack; and my five days of ‘training’.

Here are a few snaps from along the cliff tops: 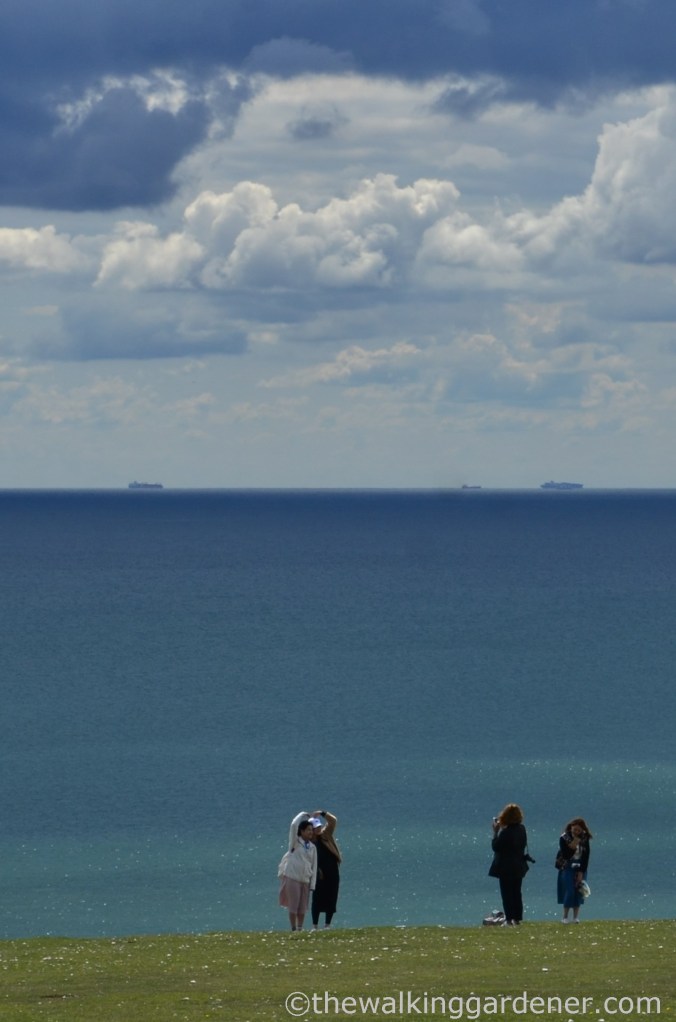 an interesting pose, if not one I needed to emulate;

the cliffs are very white because of regular land-slip and collapse;

and the cliff-edge is friable and unstable – though many visitors fail to realise the very real danger;

a breather on one of the hills;

another in a dip;

startling colour on the skyline;

and brooding cloud over the sea.  We stopped for coffee and big cake at the Birling Gap Café, before pushing on to Belle Tout Lighthouse, on the penultimate hill.

Famously, in 1999 the lighthouse was jacked up and dragged 165 feet inland.  In danger of tumbling into the sea, it was thought that pulling it back from the receding cliff edge would save the building for another 170 years.  18 down, 152 to go.

If you have the cash, Belle Tout is a non-cheap B&B with, on a sunny day, intimate views of an almost constant human-crocodile.

From the Head the view back along the Sisters is glorious and if the sun had been intermittent for the last couple of hours, it returned briefly for this dramatic ending.

Each year, approximately twenty people leap to their death from Beachy Head.  Small crosses on the precipice commemorate some of them.

This is a stunning finish and as good as that of any English National Trail.  If you can think of a better one, I can’t.

Satisfied, tired, a little achy, we descended toward Eastbourne.

It was a quick mile to the official end of the path and confirmation that I had completed 100 miles from King Alfred’s statue in Winchester (though with extras, I actually walked 112 miles in the six days). 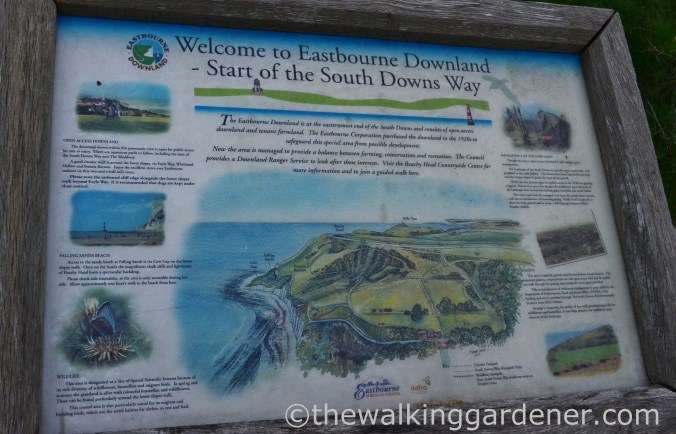 Some people would have you believe that Eastbourne is the start of the path.  Don’t listen to them.  I’ve walked The South Downs Way in both directions and I promise you that it is better walked west to east.  To my mind, Eastbourne is most definitely The End.

We had a further two miles of pavement bashing to our bus-stop; a scenic top-deck trip back along the coast, followed by a brief walk home and a delightful welcome from a very cold bottle of Chablis.

My nerdish compulsion to complete, for the first time, all of the ‘Way in one attempt had been satisfied.  And my conviction that this is as good a path as you’ll find in England held true.  Generally, the weather had been excellent and I hope the same holds true for you. 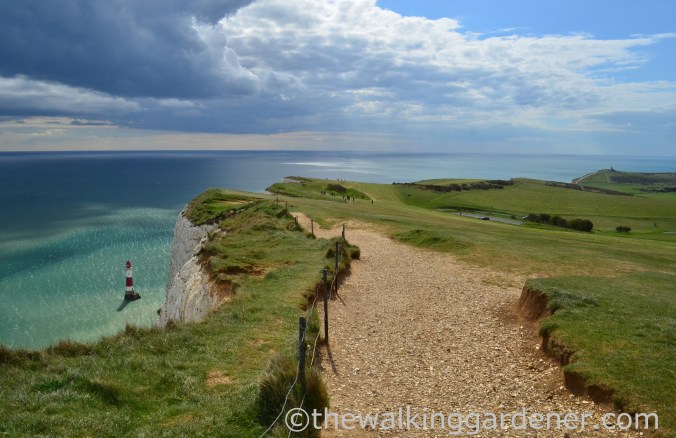 Hanging on a wall at home, we have a 1950s travel poster called ‘Downland  Rambles’.  The poster is of the above scene; though the artist has cheated somewhat by twisting and folding the perspective to bring the two lighthouses closer together; and to show more road, more white cliffs.  Gazing at this poster had helped me decide which long distance footpath I wanted to walk in 2016.

It proved a grand choice.Save

22 thoughts on “The South Downs Way: Day 6 – Southease to Eastbourne”