After mulling over which long-distance path to walk for my 2017 hiking holiday, I decided to revisit my first love, The Ridgeway.

I first attempted to walk all of this path in 1981, failed, but then succeeded the following year. And if, as a newbie, I had found both experiences challenging, it also hooked me on a strange new pastime – trekking for mile after mile, for day after day, whatever the weather, whatever the state of my feet, however achy my back; taking photos; sometimes finishing, sometimes not; and then going home.

The Ridgeway runs for 87 miles from Ivinghoe Beacon near Tring, Hertfordshire to Overton Hill, near Avebury in Wiltshire. It also runs in the opposite direction.

The path is of two quite distinct halves, through two distinct Areas of Outstanding Natural Beauty: east of the Thames, the wooded, sometimes meandering section through the Chilterns AONB; and west of the Thames, a generally broad and direct chalk track along the crest of the North Wessex Downs AONB.

As a teenager, I lived in Harpenden and The Ridgeway, just a bus ride or two away, was my local long-distance footpath. In June 1981, having just sat our A-Levels, my girlfriend Jackie and I set out from Tring and ill-prepared, ill-equipped, we headed off to Avebury. My brother had recently tramped the path and I had been intrigued by his tales of wild-camping on an ancient byway, passing through iron-age hillforts and past neolithic burial mounds. And, by Jove, if he could do it …

Me resting on The Ridgeway, at ease with curiously patched jeans. Kodachrome, June 1981

Barely out of school and new to distance walking and wild camping, I had no gear of my own. If I owned denim enough, I had to borrow my brother’s rucksack, his tent and his boots. The boots didn’t fit and I nicely overloaded the rucksack so that its external metal frame nicely rubbed the skin from my hips.

Jackie and I stumbled along for three hot days, erecting the tent only as it grew dark – for fear of attracting the scary people. By the time we reached the half-way point, we could walk no more. My overriding memory of that first attempt is of us collapsed by a field gate, laughing hysterically at how much pain we were in, how many blisters we had, how impressively our feet could bleed and how much fun we weren’t having. We caught the train home from Goring. 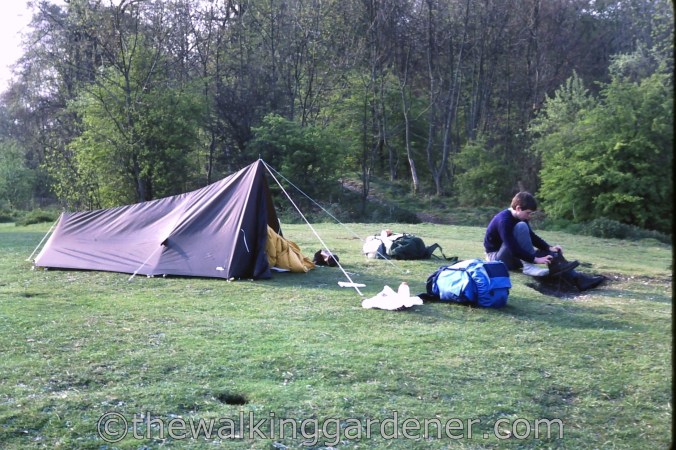 John after a cramped night in a tiny, shared tent. Kodachrome, 1982

But I can’t have been so very deterred for, the following May, I set out again from Tring with my friend John. I’d bought myself good walking boots, an excellent Karrimor Jaguar rucksack and a lightweight, for its time, tent. For those of you who care, the tent was and still is a Saunders Jetpacker II.

Me with shiny new boots and shiny new rucksack. Kodachrome, 1982

This time, I finished the path in 4½ days 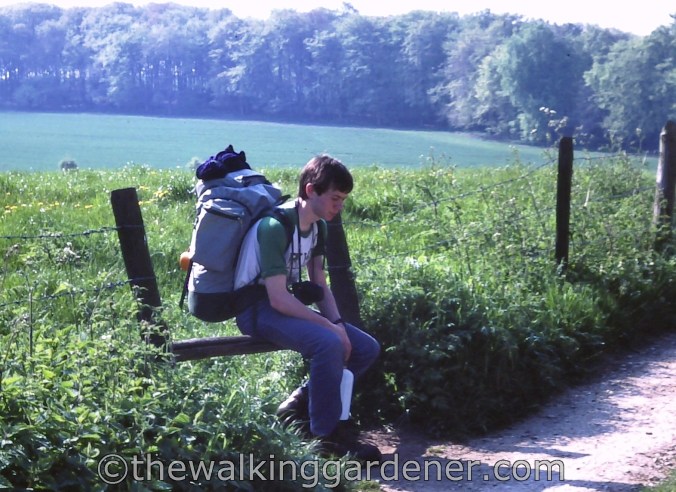 John on his last day of The Ridgeway. He has never again walked a long-distance footpath. Kodachrome, 1982

but poor John, suffering from new-boot-blisters, gave up at Goring. 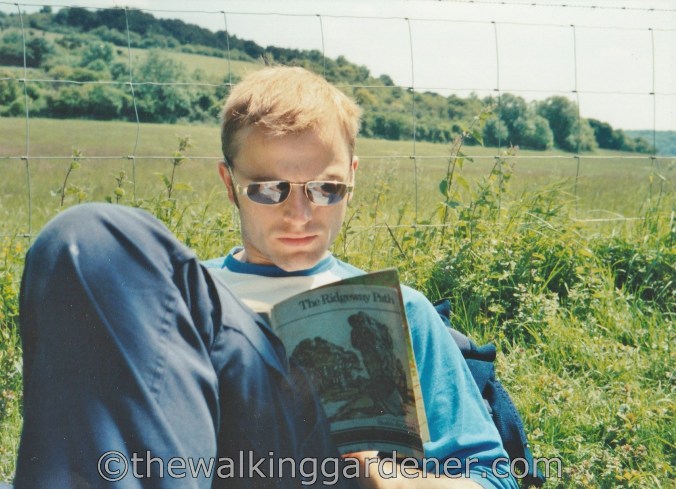 Fast forward seventeen years and I walked the path again with my partner Jim and dog Hobbes. Over a year, we walked it in two halves: Ivinghoe to Goring and Marlborough (near Avebury) to Goring.

Fast forward another eighteen years and I thought it time to revisit the path. I’ve walked many other paths since my first attempt of The Ridgeway at 18 and I wondered how it would compare to my current favourites. 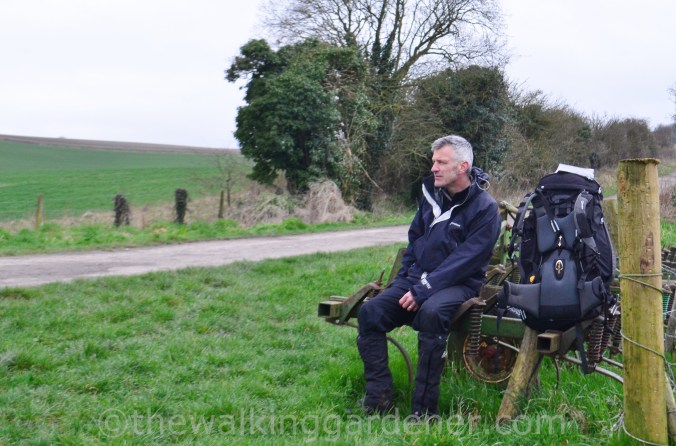 Forgoing the pubs and B&B’s I usually stay in, I decided to wild camp – just for, you know, old time’s sake. Big mistake. Huge.

Packing my ancient Saunders tent and light-weight camping equipment borrowed from my nephew, I set out one sunny March morning from Overton Hill. I was full of beans, full of hope, full of delusion. Lightweight equipment or not, I managed just two days before the weight of my rucksack and fear of irreparable damage to my hips and knees sent me home from Wantage.

I didn’t even reach bloody Goring.

This is the second incomplete walk on The Walking Gardener – along with The Norfolk Coast Path – and I hope the last. I wanted to go back and complete The Ridgeway before writing up this account but with a house move last year, and a new life in Gloucestershire to embrace this year, I haven’t yet had the time. When I do, I’ll add the remainder of the walk to this account. As I now live not so very far from Wantage, I’m hoping that the rematch will be soon.

In the meantime, I will be publishing an account of the first two days of my walk:

Day 2 – Liddington to Wantage (coming very soon after that)

14 thoughts on “The Ridgeway”