The weather was no different: snow hadn’t melted, cloud and mist hadn’t lifted, the sun wasn’t shining and it was still very cold. 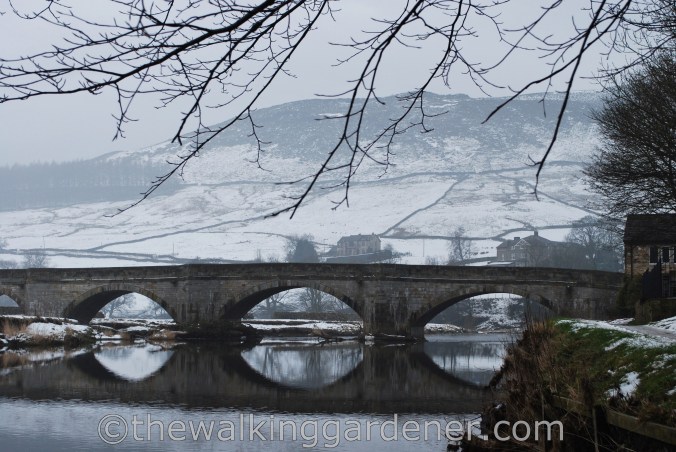 But Wharfedale was still very beautiful, in a bleak kind of way.  After another fat-soaked breakfast (and a fruit salad that I wanted to pour into my rucksack and take away with me), I set off on my second day along the river. 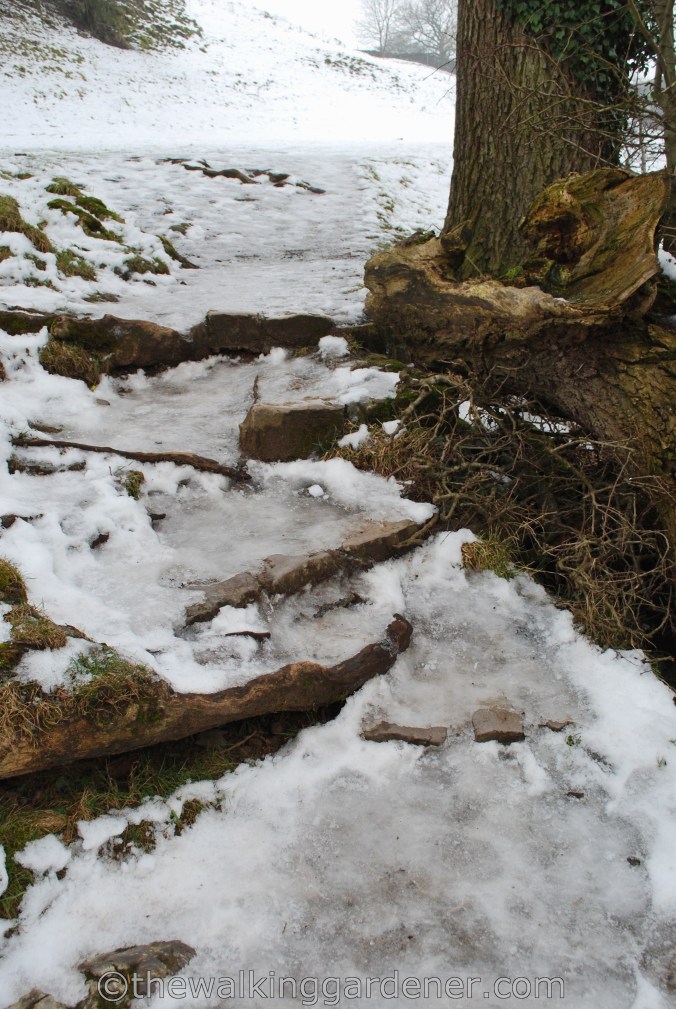 Almost immediately, I had to stop and fish out my Yaktrax again.  My boots couldn’t get a grip on the polished ice.  I used my Yaktrax several more times during the day.

The riverside path would normally be busy but the ice made it unsafe for long stretches and I barely saw a soul.

I arrived in and passed through Grassington without stopping.  The DW leaves the river just beyond the town as local landowners and fishermen opposed granting a right-of-way along the riverbank – thanks, guys.  Instead, the route climbs quite steeply onto limestone.

These few miles away from the Wharfe and high up above the valley, are a highlight of the Dales Way – thanks, guys. 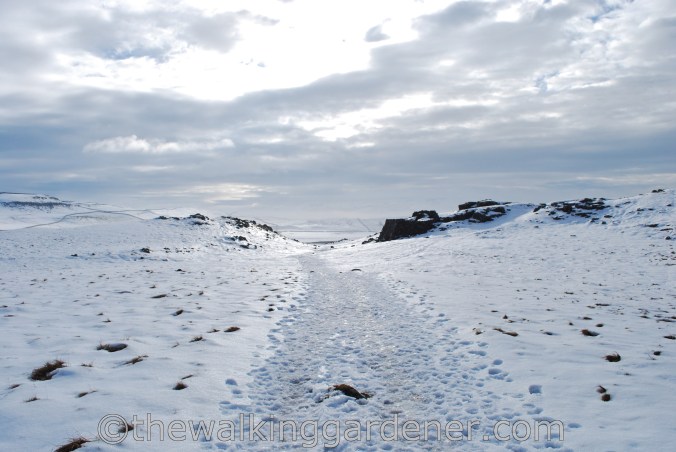 As I scrunched through icy snow 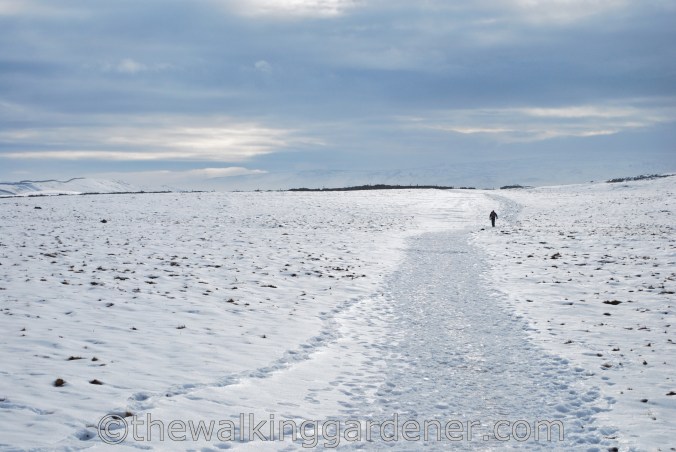 (followed by THIS man)

I was captivated by the views 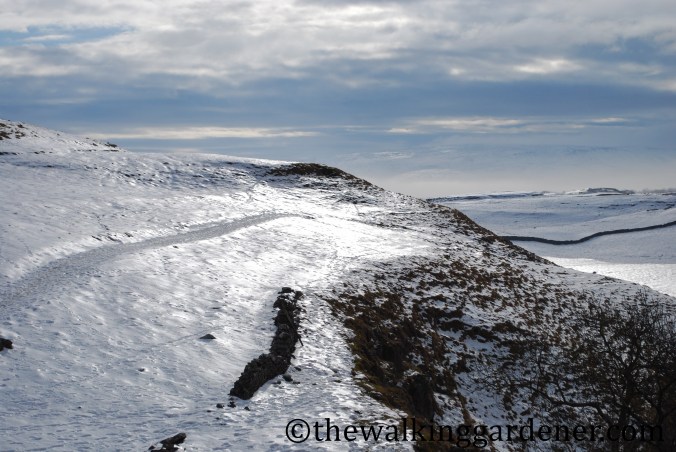 and scenery all around me.

Unlike the Coast to Coast (which I walked in March 2013), the DW is well signed … though you’ll still need a guide-book.  (But this signpost is wrong – the distance between Grassington and Kettlewell is six and a half miles.  A part of me, with bobble hat and nasal whiny voice, simply had to tell you that).

I eked out this section as much as I could;

stopping regularly, stretching out time and then slowly walking on again. 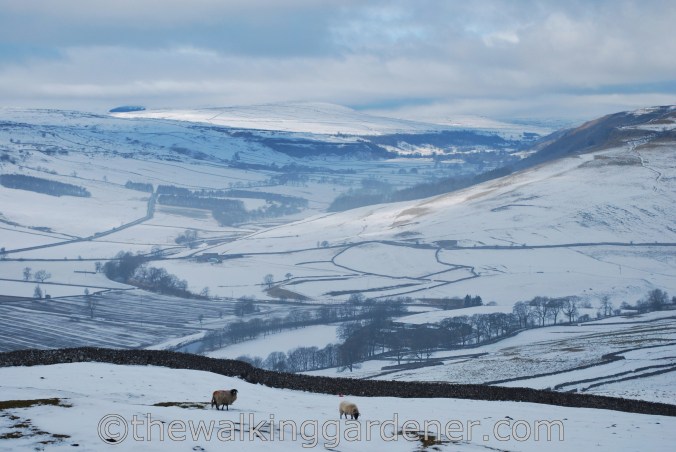 I have rarely seen a more lovely,

Today alone was vindication for travelling up to Yorkshire in February, in snow, to walk an 80-mile path.

When the path finally began its descent back to the river, disappointment slowed me down even more.  I didn’t want to leave that high, brittle landscape … but a marvellous steak and ale pie at The Racehorses Hotel in Kettlewell was good compensation.

After lunch, I rejoined the Wharfe for the last few miles of the day.  Buckden (usually considered a natural end to day 2) used to have three pubs, but the last of these had closed shortly before my trip.  (The Buck Inn has reopened since I passed through).  With nowhere to sleep in Buckden, I had a further mile’s traipse, up the road to Cray and my bed.

The White Lion is an old, unspoilt pub but it was comparatively pricey at £57.50.  (It has changed hands and been refurbished since my stay).  And whilst my room was OK, the landlord seemed reluctant to heat it.  When I rested on my bed on arrival, the room was so cold, I needed to get under the covers.  Maybe it was a ploy to lure me from my room to sit in the bar, by the fire, supping his beer. 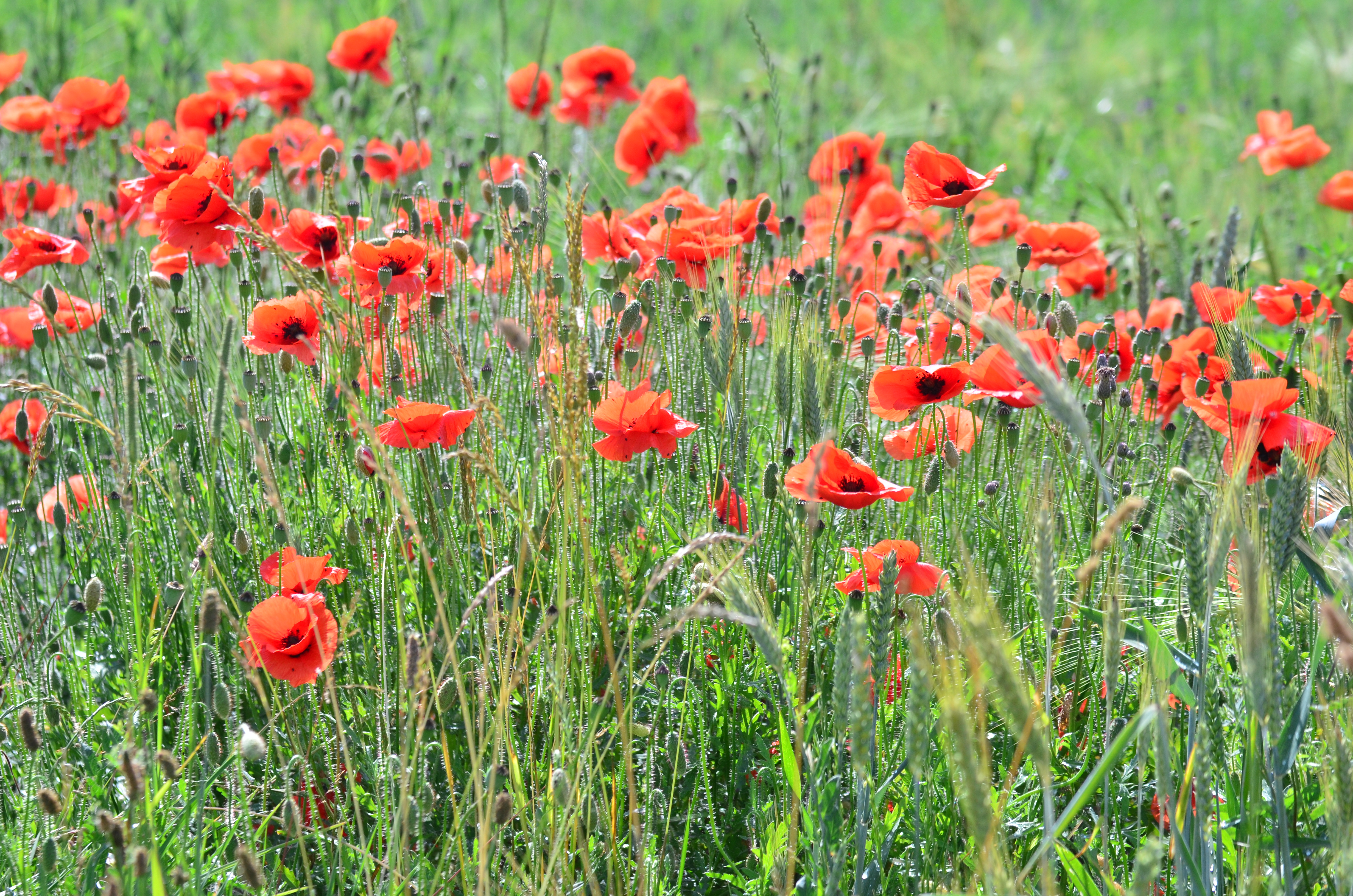