After my disappointment at last night’s food, I charged downstairs for some serious, no-nonsense feeding … and this time I wasn’t disappointed.  The full English was generous; actually quite superb. and my liking for the ‘Ye Olde George Inn’ notched up two points.

With a full stomach, at last, I stepped outside, buckled up my gaiters, pulled on my rucksack, loosened my belt a notch, rubbed some dried muck off my trousers and set off, whistling, to rejoin the South Downs Way.

Today was my shortest leg.  Whilst accommodation on the trail is plentiful, it isn’t always perfectly spaced.  During the planning stage, my brain had throbbed over arranging six fairly equidistant stop-overs.  In the end, I gave up – hence a long first day, this short one, followed by a long twenty-miler.

By 9am I was back on the path with an immediate warm climb through woods; 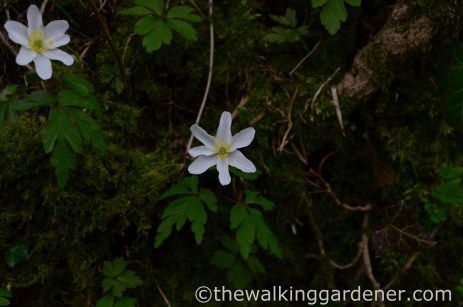 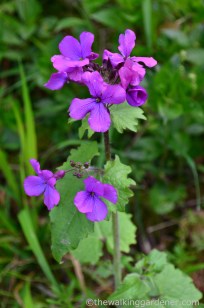 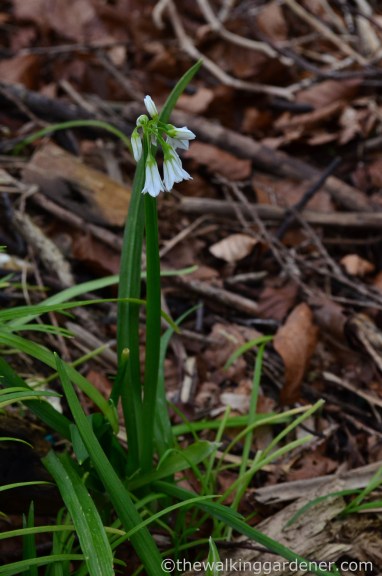 to birdsong and wild-flowers. 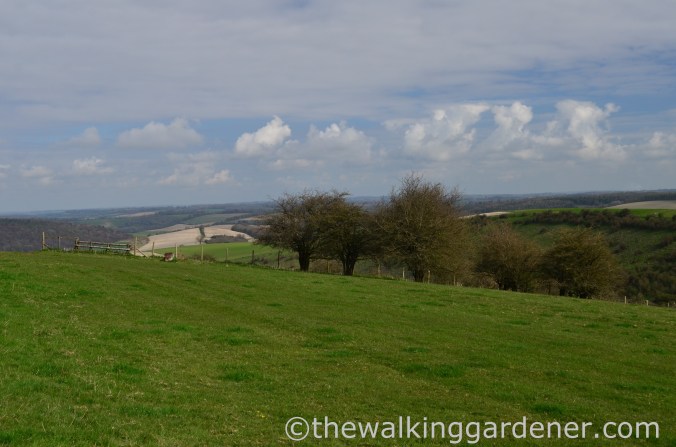 At the top, the trees thinned to reveal brilliant 360° views over Hampshire.  With a lot of sky.

I was in high, bubbly spirits, slowly spinning to look about me when a fast shadow passed overhead.

Looking up, a large bird of prey whooshed past again – a red kite.  In my excitement (I’d never seen a kite on the Downs before) I barely had time to focus my camera before the unhelpful one sailed away.  A party of three women ‘Wayers stopped to see what all my fuss was about but were visibly unimpressed when I told them.  (They lived in  Oxfordshire, where kites are two-a-penny).

I was in no hurry on this short day and walked slowly, meeting  the Most Impressive Ram Of The Day;

and the funniest, loudest, most inquisitive, quarrelsome goose.  I rather fell for him … or her. 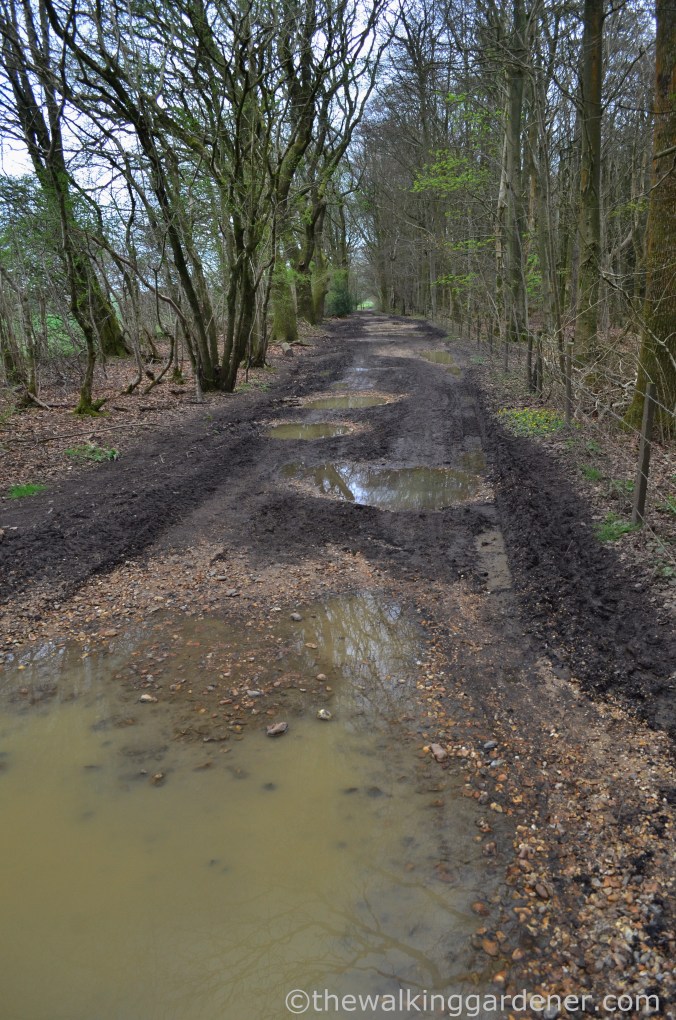 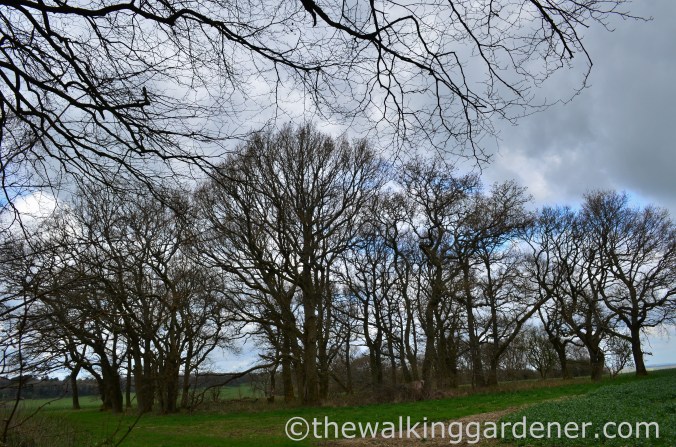 until I stopped at an unremarkable copse, just off the path.  It was here, eight years ago, that I slept after a long, long walk from Amberley and an increasingly desperate search for somewhere unobtrusive to pitch my tent.  My dog, Hobbes, grunted when I produced her blanket from the bottom of my rucksack and laid it at the foot of my sleeping bag.  (As usual though, by the morning she’d shimmied up and her nose touched mine). 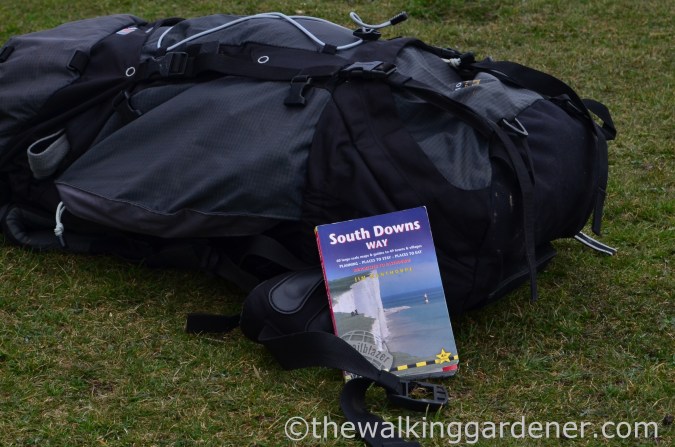 with its simply drawn maps 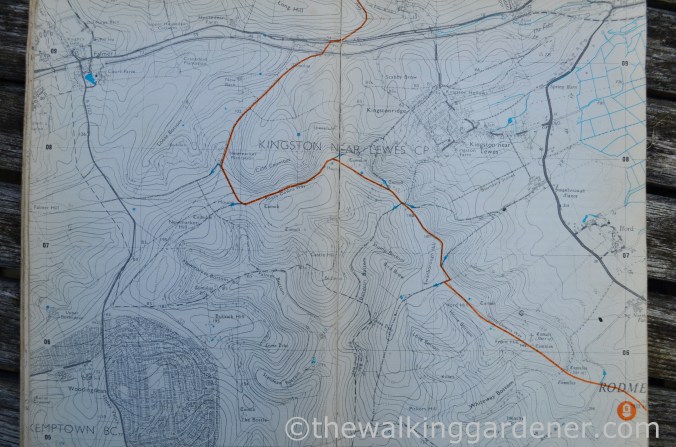 but I prefer the Ordnance Survey map sections, 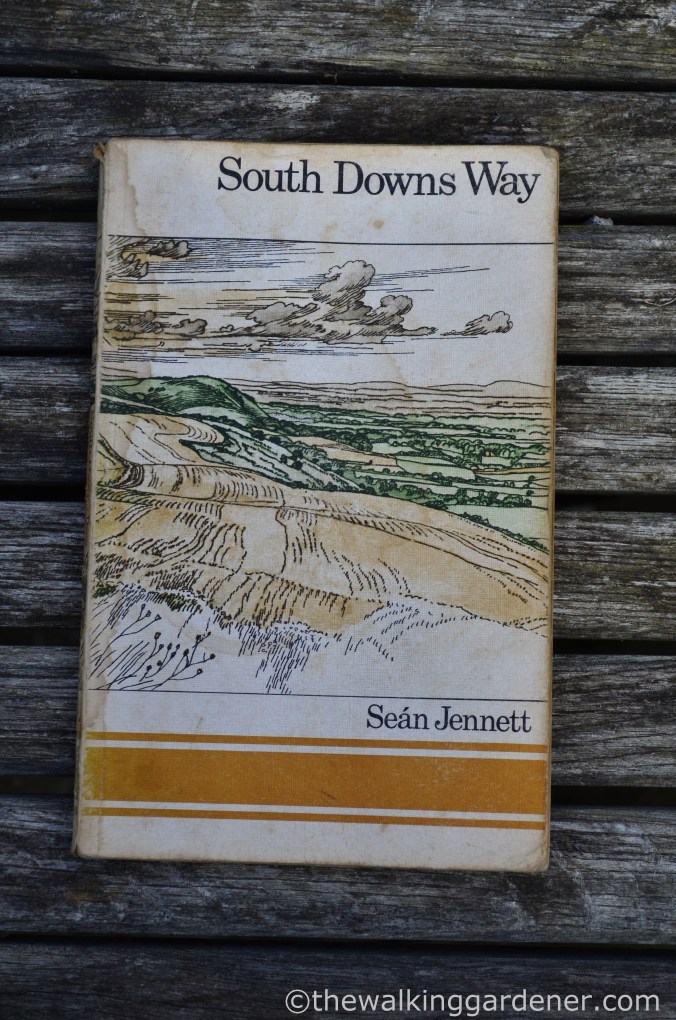 At Butser Hill, the highest point on the SDW, I stopped for my regular boot-selfie and a day-old sandwich from Winchester M&S.  It was OK with a slightly, not altogether unpleasant, fermented after-taste.  I’d tell you the filling but I can see your eyes glazing.

As I ate, I watched a National Trust worker tending his flock and felt voyeuristic watching him through my zoom lens, if a little jealous too.

I walked down the hill to pass under the busy A3 and spotted two buzzards a couple of hundred yards away.  Slowly, I stalked closer but they flew off as soon as they saw the cut of my jib and before I could get too close.

A little later, I stopped at the Queen Elizabeth Country Park visitor centre for OK tea and OK cake and remembered how Hobbes and I had struggled to find enough drinking water during our adventure.  (Hobbes was happy to lap from puddles – me, less so).

We were only able to camp in 2008 when a kindly cyclist saw me banging my head against the centre’s dry tap.  He gave me his bottle of water and I was so grateful (at not needing to divert, by bus, off the path to fill my own bottles) I almost kissed him.  Only the look of alarm on his hitherto friendly face stopped me in time.  Now, in 2016, there are several more path-side water taps along the SDW … and they all worked.

The 600 hectare QE park is a mix of downland and one of the largest continuous areas of woodland in the south-east.  It also has  20 miles of various crisscrossing paths; but the SDW is clearly signed and route finding straightforward. 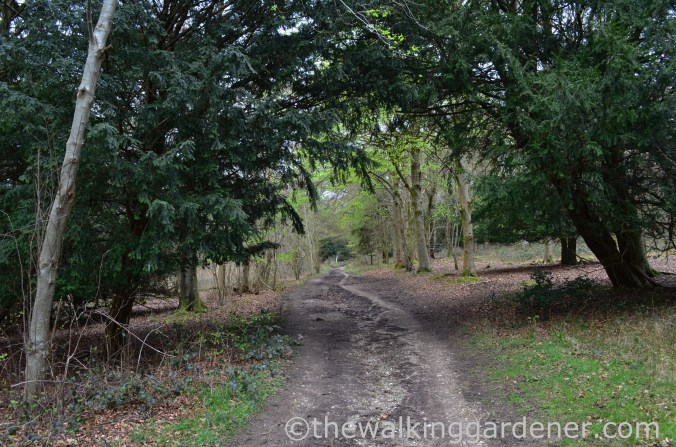 The ‘Way used to follow an unmetalled road used by cars (and still does according to my guidebook) but now it diverts to higher, quieter ground and for once, I was totally, gratefully alone. 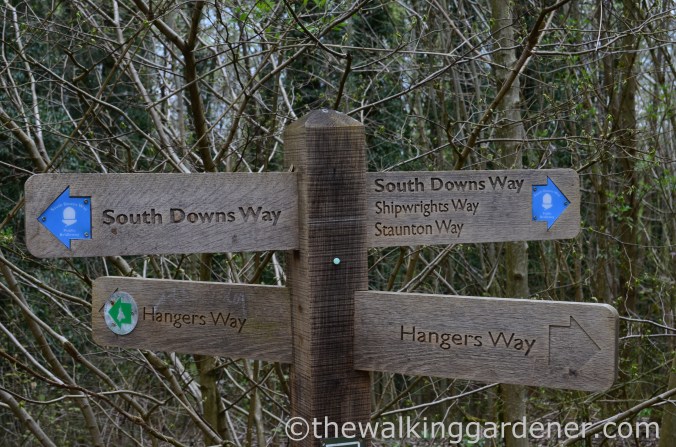 The Shipwrights Way? The Staunton Way?  The Hangers Way?  England has such a rich choice of paths – many of which, like these three, I’d never heard of.

The afternoon wound on as I left the Park behind and followed a broad track eastwards. 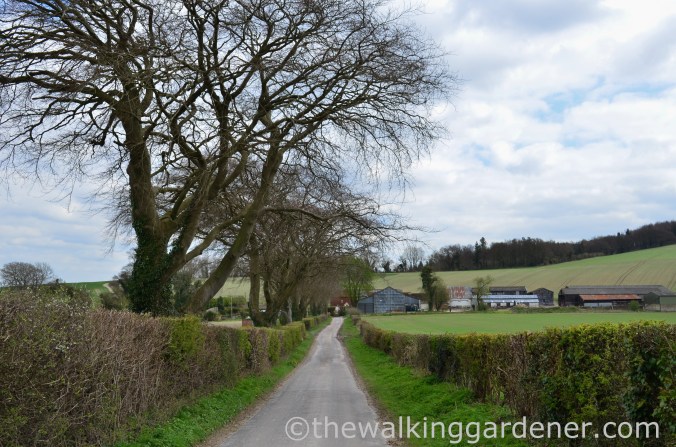 With plenty of time, I stopped often to sit on the verge or a tree stump, to drink water, study my guidebook or eat an apple.  There are worse days to spend a sunny day in April.  The Hampshire Downs are more wooded than those of Sussex and whilst I enjoy sylvan walking, far-off views are often obscured and the true sense of rolling Downland is muted. 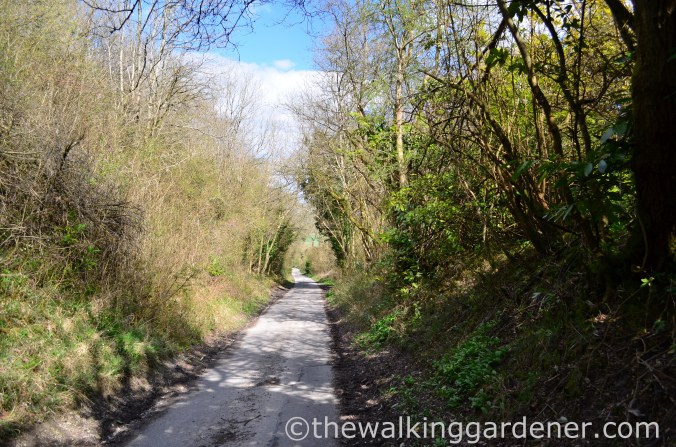 At 3pm, I took a sharp left off the main Way and descended the scarp face,

past swathes of wild garlic 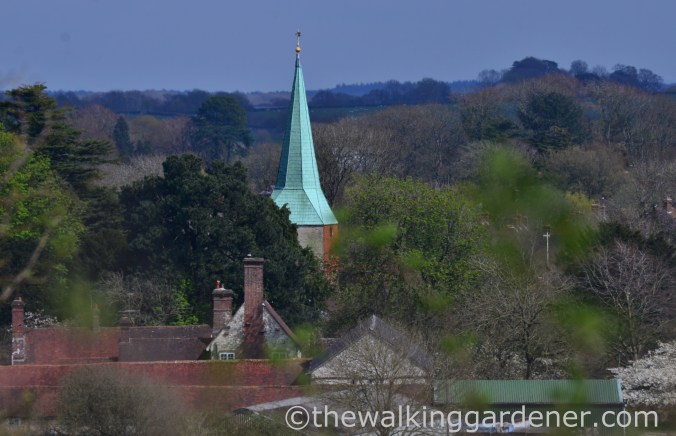 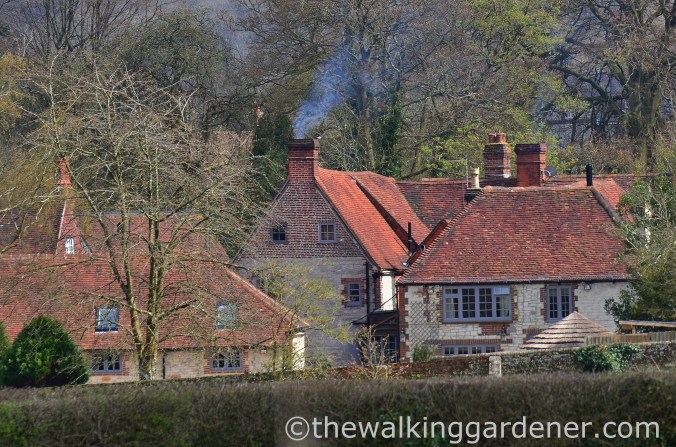 The state of ‘The Ship‘ pub was alarming and I panicked at the prospect of a beer-less evening.  Thankfully, though ‘The Ship‘ has closed for good, ‘The White Hart‘ a little up the road is still open.  Tugging off my rucksack, I sat outside in afternoon sunshine with a pint of lager shandy and, of course, a packet of cheese and onion crisps.

A few minutes walk away is ‘South Gardens Cottage‘, which might be the prettiest B&B I’ve ever stayed in.

I loved my Enid Blyton room and immediately felt at home in this fascinating C15th, gloriously old-fashioned home.  After a bath, (no new-fangled showers here) I returned to the pub for decent grub (no moans about portion size or overpricing, note) and to write up my journal.  I anxiously checked the BBC weather app for the days ahead but needn’t have worried.  The sun would be shining for a while yet and tomorrow I’d have a clear – if hot – 20 mile march to Amberley and the halfway point of the South Downs Way.ave 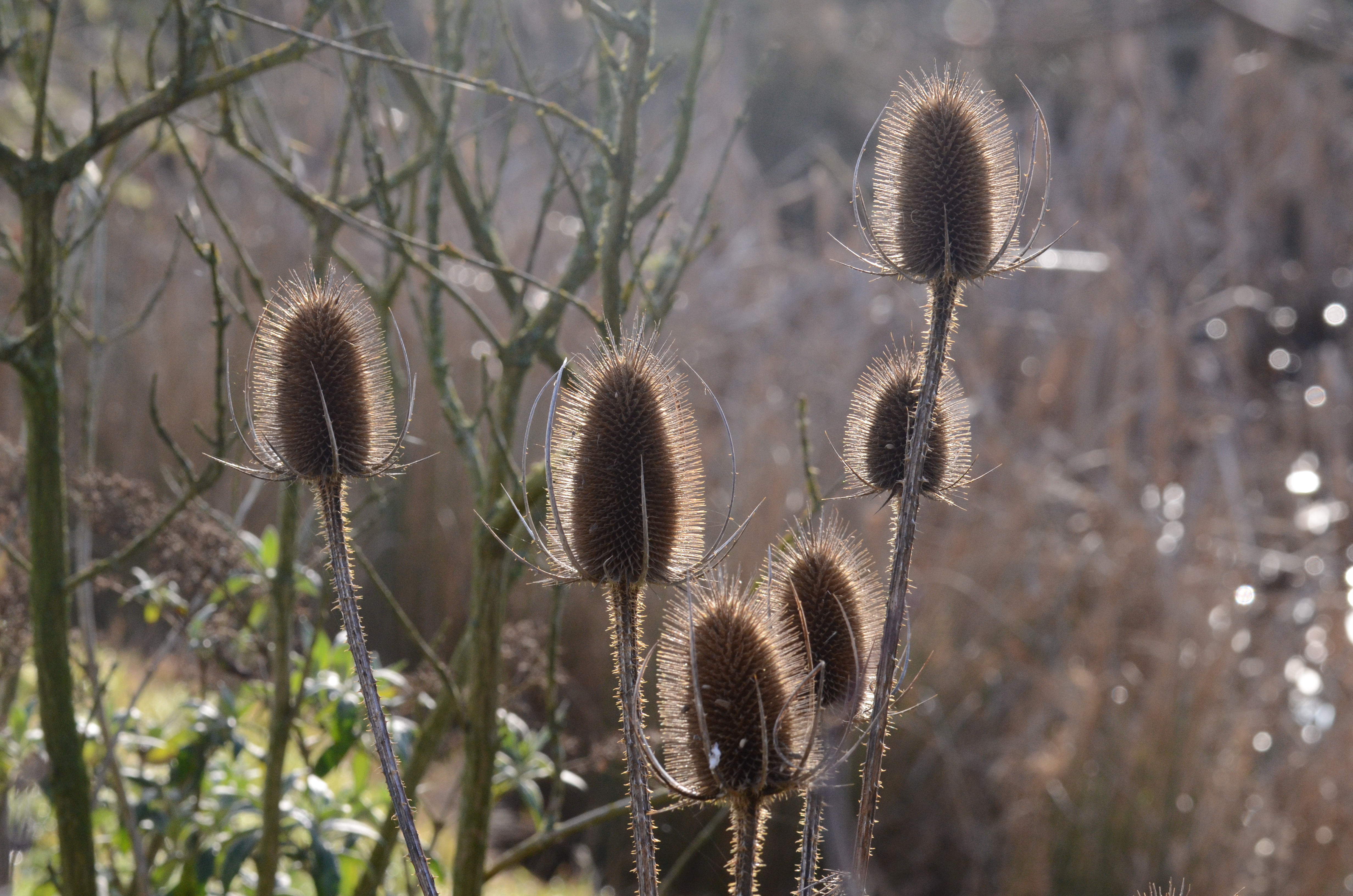